Make it three teams for Matt Eberflus. The Chargers plan to interview Colts defensive coordinator for their head coaching vacancy, as Ian Rapoport of NFL.com tweets. 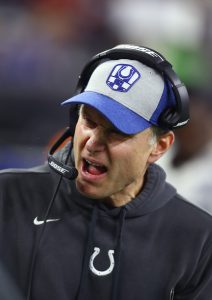 There’s some belief that the Chargers will look for an offensive-minded coach to groom quarterback Justin Herbert and deviate from the previous administration, but Eberflus comes with credentials. When he arrived in Indy (originally as the chosen lieutenant of Josh McDaniels), the Colts had one of the league’s worst defenses. They’ve made strides with Eberflus, managing to rank eighth in total defense in 2020. If the wheels didn’t come off towards the end of the year, they would have placed even higher.

Eberflus has been eyeing a head coaching opportunity for some time now, and the Chargers job could give him a chance to make an immediate mark in the league. The Bolts were a sub-.500 team in 2020, but they easily could have been a playoff team with a healthy roster and fewer managerial mistakes.