The Eagles are a bit behind the curve after their late firing of Doug Pederson, so they don’t have any time to waste as they move forward in their unexpected coaching search. We’ve already heard they’re interested in luring Lincoln Riley from the college ranks, they’ve requested interviews with Todd Bowles and Arthur Smith, and now we’ve got another candidate on their radar. 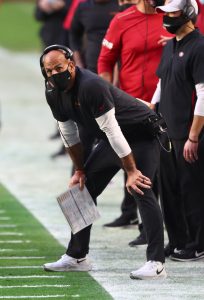 Philadelphia has requested an interview with 49ers defensive coordinator Robert Saleh, Adam Schefter of ESPN.com tweets. After going through a second Jets interview Wednesday, Saleh is on his way to Philly and will begin interviewing with the team tonight, Ian Rapoport and Peter Schrager of the NFL Network note (Twitter links).

Saleh has been a hot name, getting linked to pretty much every open job. Eagles owner Jeffrey Lurie indicated at his press conference Monday that he usually prefers a quarterback guru as head coach, but he clearly isn’t married to that idea.

To that end, we also have some additional details on what a potential Saleh coaching staff would look like, via this tweet from Peter Schrager of NFL Network. Schrager writes that the belief around the league is that Saleh would bring a 49ers offensive assistant with him to be his OC wherever he goes, and that they would seek to implement a “Shanahan”-style offense.

That would mean a heavy run and play-action scheme. Schrager specifically highlights Mike LaFleur and Mike McDaniel as names to watch on that front. McDaniel is the 49ers’ run game coordinator who has coached under Kyle Shanahan for most of the past decade, while LaFleur is the passing game coordinator who has been with Shanahan since 2014 with the Browns when he was an offensive intern. He’s also the younger brother of Packers head coach Matt LaFleur.