The Eagles have requested interviews with Todd Bowles and Arthur Smith for their head coaching vacancy (Twitter links via ESPN.com’s Sal Paolantonio and Dan Graziano). They’ll also chat with Robert Saleh, though his dance card is filling up fast. 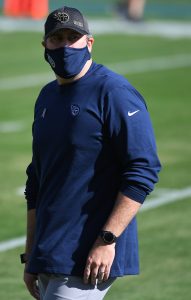 After much deliberation, the Eagles fired one-time Philadelphia hero Doug Pederson. Now, they’re hitting the ground running in their search, starting with some of this cycle’s hottest names. They’ll also look at some of their current coaches, including assistant head coach/running backs coach Duce Staley. Earlier this week, owner Jeffrey Lurie pegged him as a likely candidate.

Every team without a head coach has asked to chat with Smith. At this point, it would be a shock if the Titans’ offensive coordinator didn’t land one of those jobs. Bowles is also drawing interest, even though his Jets tenure ended with a 24-40 record.

University of Oklahoma head coach Lincoln Riley might also be in the mix, but it’s not immediately clear if he’s willing to interview.