After a three year stint in Washington, Morris got his next prominent coaching positions in Atlanta. He served as an assistant head coach and pass game coordinator from his arrival in 2015 to 2019. Then, in 2020, he became the team’s DC until taking over as interim HC following Dan Quinn’s firing. This past offseason, Morris was hired by the Rams to take over for now-Chargers HC Brandon Staley as the team’s defensive coordinator.

Another name has been added to the list of potential head coaching candidates in Minnesota. The team has requested an interview with Raheem Morris, the current Rams defensive coordinator (Twitter link via NFL Network’s Peter Schrager).

After a three year stint in Washington, Morris got his next prominent coaching positions in Atlanta. He served as an assistant head coach and pass game coordinator from his arrival in 2015 to 2019. Then, in 2020, he became the team’s DC until taking over as interim HC following Dan Quinn’s firing. He interviewed to remain in Atlanta on a full-time basis, but the team ultimately went with former Titans OC Arthur Smith.

This past offseason, Morris was hired by the Rams to take over for now-Chargers HC Brandon Staley as the team’s defensive coordinator. His work in L.A. has prompted many to expect more head coaching opportunities, so it was surprising this is the first request he has received in the 2022 coaching cycle.

The news brings the total number of candidates linked to the Vikings’ HC vacancy to ten. Here is the updated list:

The Rams made it official Thursday. Raheem Morris will become the team’s third defensive coordinator in three years. 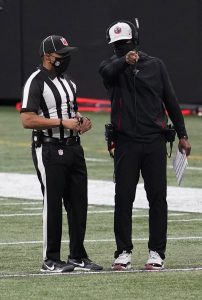 Morris will replace Brandon Staley, who made a late surge to land the Chargers’ HC job last week. While Morris has been a head coach and interim HC, this move marks the first time a team has hired the 44-year-old coach to become its defensive coordinator. Morris worked his way up to that role in Atlanta, rising to the position in 2020, after spending five seasons as a position coach under Dan Quinn. This interestingly included stays coaching the Falcons’ DBs and wideouts. The Falcons fired Quinn in October and promoted Morris but tabbed Arthur Smith as its full-time HC last week.

A former Tampa Bay head coach, Morris will reunite with Sean McVay in Los Angeles. McVay’s first NFL job, as an offensive assistant, was under Jon Gruden with the 2008 Buccaneers. Morris coached Tampa Bay’s DBs that season, prior to being promoted to head coach in 2009. The pair again worked together in Washington, with their tenures as OC (McVay) and DBs coach (Morris) overlapping in 2014.

With this move coming four days after Staley’s departure, the Rams did not conduct a wide-ranging search before hiring Morris. The longtime Falcons coach, however, interviewed for the Atlanta full-time HC gig and met with the Jaguars about their HC and DC positions. The Rams are coming off a season in which they used a bevy of defensive schemes to rank first in both scoring and total defense. With Aaron Donald and Jalen Ramsey signed long-term, Morris will enjoy a personnel upgrade from the defense he coached in Atlanta.

After Brandon Staley landed the Chargers’ head coaching job, the Rams are moving quickly to replace him. The Rams are “focusing” on Raheem Morris as their new defensive coordinator, sources told Mike Garafolo and Ian Rapoport of NFL Network (Twitter link).

Garafolo cautions that the deal isn’t quite done yet, but it’s “looking like he will be the one” to replace Staley. It’s been a busy past six months for Morris, who started the 2020 season as Atlanta’s defensive coordinator before getting promoted to interim head coach when Dan Quinn was fired after five games. The Falcons went on an initial hot streak under Morris, leading to some reporting that he had impressed team brass and could be a real candidate for the full-time job there, but the team ultimately fizzled down the stretch and then hired Arthur Smith instead.

He still got an interview from Atlanta, and also got a head coaching interview with the Jaguars. After the Jags hired Urban Meyer, he interviewed with Jacksonville for their DC role. Rapoport added in a follow-up tweet that Morris was “the target in several other places,” so it sounds like the Rams won a bidding war of sorts.

There had been some talk that the Rams could go in-house to replace Staley, like with cornerbacks coach Aubrey Pleasant, but clearly Sean McVay had other ideas. Morris was previously the head coach of the Buccaneers for three seasons from 2009-11, where he went 17-31.

He’s highly regarded in league circles though, and had the Falcons fighting really hard despite the 0-5 start. With Aaron Donald and Jalen Ramsey at his disposal, he’ll have a lot of talent to work with in Los Angeles.

New Jaguars head coach Urban Meyer is no stranger to success as a sideline general, but the professional game brings with it a whole host of considerations and problems that don’t exist at the college level. Perhaps as a result of that, Meyer is eyeing a former NFL head coach for his defensive coordinator post.

As Albert Breer of SI.com reports (via Twitter), Raheem Morris will interview for the Jacksonville DC job this week. Morris actually interviewed for the team’s HC gig after he finished out the 2020 campaign as the Falcons’ interim head coach, and he of course served as the Buccaneers’ HC from 2009-11. In total, Morris has a 21-38 head coaching record.

Despite that less-than-impressive mark, Morris remains well-respected both as a coach and as a defensive mind. He got the Falcons to show some signs of life this year after Dan Quinn‘s dismissal, and he did get an interview for Atlanta’s full-time HC position, which ultimately went to Arthur Smith. He was also a potential candidate for the Raiders’ DC job, though Vegas opted for Gus Bradley instead.

Morris will have a lot of work to do if he joins the Jags. The club has some talent on the defensive side of the ball, but it did finish towards the bottom of the pack in terms of total defense this year.

Breer notes that Meyer was considering Quinn for the DC position — Quinn recently accepted the Cowboys’ defensive coordinator job — and that Meyer is a big fan of the type of scheme that Quinn ran in Seattle earlier this decade. After having worked for Quinn for six years in Atlanta, Morris would presumably bring some of those same concepts in addition to his own defensive acumen.

Adam Schefter of ESPN.com first reported (via Twitter) that Morris and Meyer were in contact about the defensive coordinator position. 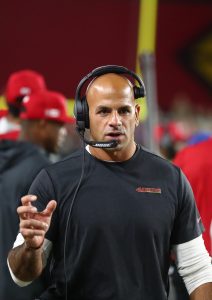 While Urban Meyer has been the name most closely connected to this search, no interview has been scheduled. Bieniemy will speak with Jags brass Wednesday, with Morris and Saleh interviews on tap for Thursday and Saturday, respectively.

Now a regular on the HC interview circuit, Bieniemy has been Kansas City’s OC since Patrick Mahomes‘ QB1 tenure began. While Bieniemy is not the Chiefs’ primary play-caller, he has long been expected to land a coaching gig this year. He may hit for the cycle in coaching interviews as well. The Chargers have requested an interview with their former running back. The Lions have already interviewed Bieniemy, while the Jets and Falcons will speak with him as well.

Saleh would be an interesting hire. He has a history with the Jaguars during Shad Khan‘s ownership tenure. The current 49ers defensive play-caller spent three seasons (2014-16) as Jacksonville’s linebackers coach. A Michigan native, Saleh has been most closely connected to the Lions job and has already interviewed with the Falcons. The Bolts submitted an interview request as well.

Re-emerging on the HC radar for the first time in many years, Morris interviewed for the Falcons job he held during this season’s second half and has come up in the Raiders’ defensive coordinator search. The Jags are the first non-Falcons franchise to request a Morris HC meeting, however.

The Jaguars have also requested an interview with Titans OC Arthur Smith, joining every other HC-seeking team in that regard.

The Jaguars have requested an interview with Raheem Morris, as Josina Anderson of ESPN.com tweets. The Falcons’ interim head coach is also up for the job in Atlanta, but he may have better odds elsewhere.

Morris began the year as the Falcons’ defensive coordinator before taking over for Dan Quinn midway through the year. After he took over, the Falcons posted a 4-7 record and showed some signs of improvement. Between that and his time with the Bucs, he has a lifetime 21-38 record as a head coach.

Much of the chatter surrounding the Jaguars’ vacancy has been centered around Urban Meyer. But, depending on who you ask, the big-name college coach may be seeking upwards of $12MM per year to jump to the pros. Also, there’s still a chance that he could pass on the chance to jump to the NFL, or that someone like Morris could shine brighter throughout the process.

The Jaguars are also looking at 49ers defensive coordinator Robert Saleh as well as Titans offensive coordinator Arthur Smith. And, at the same time, they’re in the midst of their GM search. On Tuesday morning, former Browns GM Ray Farmer became the latest name in that group.