This is a big year for offensive coordinator hires, with nearly half the league conducting searches or likely being set to do so. Here are the teams searching for new OCs and DCs. As new searches emerge, they will be added to the list. 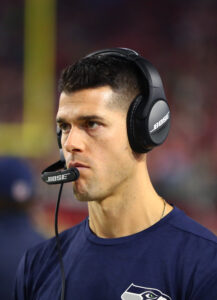 The Ravens have sent out 10 interview requests about the job. Some went to internal staffers and others to current coordinators. Canales profiles as an up-and-coming option, but he has extensive experience. The veteran position coach has been on Pete Carroll‘s Seahawks staff since the HC arrived in Seattle in 2010.

Canales, 41, has not been connected to any other OC search yet, but it is not surprising the Ravens are showing interest. Geno Smith just completed one of the more surprising years by a quarterback in recent NFL history. Signed in April to a one-year, $3.5MM deal, Russell Wilson‘s former backup provided strong work replacing the franchise icon. Smith led the NFL with a 69.8% completion rate and threw 30 touchdown passes, piloting the Seahawks to a wild-card spot.

Wilson also worked under Canales, who served as the Seahawks’ QBs coach from 2018-19 and their passing-game coordinator from 2020-21. While Wilson struggled mightily in his Denver debut, he continued to lift Seattle squads to the playoffs during most of his time with Canales. Carroll saw plenty in Canales, bringing him from El Camino College — a JUCO program — to USC in 2009 and then installing him as a full-fledged position coach in 2010.

While the Ravens are progressing to second-round interviews with some candidates, they’re also set to conduct first interviews this week. According to ESPN’s Jeremy Fowler (on Twitter), the organization will interview Bills wide receivers coach Chad Hall on Wednesday.

Hall started as an assistant with the Bills in 2017 and has spent the past four seasons as their WRs coach. Stefon Diggs has exploded during his three seasons with Buffalo, but Hall has also squeezed a career year out of John Brown in 2019 and has helped with the development of late-round wideouts like Gabriel Davis and Isaiah McKenzie.

Baltimore interviewed former OCs George Godsey, its current tight ends coach, and 2022 Broncos OC Justin Outten. The Ravens also spoke with Georgia OC Todd Monken this week; Monken is also on the radar to return to the Buccaneers. The Ravens sent Eric Bieniemy an interview request, but it is unclear if the longtime Chiefs OC is interested in a non-head coaching role. Baltimore has promoted from within to fill its OC role recently, hiring Roman and Marty Mornhinweg, but it appears to be seriously considering outside options this time.

Here is how the Ravens’ OC search looks:

Ravens head coach John Harbaugh told reporters this week that the franchise will “cast a wide net” for what he considers to be “one of the top football coaching jobs in the world,” according to Mary Kay Cabot of cleveland.com. The team has followed through on that promise thus far, continuing a trend today as they made their third request to interview a candidate in the past two days. This time, ESPN’s Jeremy Fowler reports that the target is Seahawks quarterbacks coach Dave Canales.

Canales is a longtime Seattle staffer who has spent his entire life on the west coast. Growing up and schooling in California, Canales took the progressive steps from high school coordinator to community college position coach to Power Five strength coach all within a five-year period.

As the Seahawks’ quarterbacks coach, Canales ensured the seamless transition from one Pro Bowl quarterback to another. Working closely with quarterback Geno Smith, who had started five games in the previous six seasons, Canales coached Smith to a career year in the quarterback’s ninth season. During Smith’s first two seasons in the NFL, his only two as a full-time starter prior to this year, Smith had a paltry completion percentage of 57.5 and threw more interceptions (34) than touchdowns (25). This year, under Canales, Smith led the NFL with a completion percentage of 69.8 and was the only quarterback in the league to throw 30 or more touchdowns while tossing less than 12 interceptions.

The move to Baltimore may be a bit of a culture shock for the longtime westerner, but the Ravens would be rewarding him with a promotion to coordinator and the keys to an offense with an MVP quarterback if he gets the position. Lamar Jackson, while still completing a respectable 62.3-percent of his passes this year, finished the season with his lowest completion percentage since his rookie year. He has also seen his QBR plummet ever since his league-leading 83.0 rating during his MVP campaign. Bringing in a coach who has experience with a mobile quarterback like Russell Wilson and helped develop a veteran passer like Smith could be just what the doctor ordered in Baltimore.

For now, Canales is one of many coaches expected to fall under the widely cast net as Harbaugh and the Ravens look to fill one of the top football coaching jobs in the world. The team has also recently requested meetings with Rams quarterbacks coach Zac Robinson and Browns wide receivers coach Chad O’Shea. There is likely to be several more names in consideration as Harbaugh, Jackson, and company decide who will best help them to take the next step.

With the various changes to coaching personnel around the league winding down, teams are beginning to officially unveil their 2022 staffs. The Seahawks recently did so, confirming a number of changes following a disappointing season, but some important retentions as well.

As Bob Condotta of The Athletic tweets, Sanjay Lal is remaining with the team in his current role of wide receivers coach/passing game coordinator. The 52-year-old has worked with that position group on seven different teams dating back to 2009. He spent the 2020 campaign in Seattle, but spent last season in Jacksonville. Meanwhile, Karl Scott, 36, is officially being brought in as the team’s secondary coach and defensive pass game coordinator. That move had been expected since last week when it was reported the team was in talks with him.

In addition, Aaron Wilson of Pro Football Network reports (in a pair of tweets) more names on the offensive and defensive sides of the ball. Dave Canales will remain as the team’s QBs coach, a role he first had in 2018, but he will no longer have the passing game coordinator title. Brad Idzik has been added as an assistant WRs coach; he entered the NFL with Seattle in 2019. Lastly, Nate Carroll has been promoted to senior offensive assistant, after spending 11 years with the Seahawks in various roles.

As for the defensive staff, Aaron Curry is now an assistant defensive line coach; the former Seattle draftee spent the last two seasons on their sideline. He will be joined in that role by Damione Lewis. Another former player on staff is DeShawn Shead, who has been promoted to defensive backs coach. The last to fit that description is Will Tukuafu, who is coming aboard as a defensive quality control coach.

Here are some other coaching notes from the NFC:

While contract talks between the Seahawks and Russell Wilson seem to be stalled, Seattle is interested in continuing negotiations with another quarterback: backup Tarvaris Jackson. We heard last month that the club was still talking with the 31-year-old Jackson, and today head coach Pete Carroll told reporters, including Bob Condotta of the Seattle Times (Twitter link), that the Seahawks want to bring Jackson back.

Here’s more from the Pacific Northwest, with all links going to Condotta’s Twitter account unless otherwise noted: