Days away from coaching for a national championship, Ohio State HC Ryan Day has popped up on at least one NFL team’s radar. The Jaguars are rumored to be interested in the second-year Buckeyes coach, who was once a frontrunner for the Titans’ OC job. 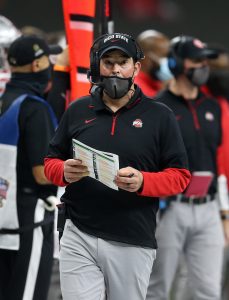 However, Day does not want to leave the college ranks at this time. The young HC does not plan to take NFL interviews, according to ESPN.com’s Adam Schefter (on Twitter).

Day’s former boss, Urban Meyer, appears in front of him in the Jaguars’ pecking order. But Day has certainly elevated his stock this year, leading Ohio State past Clemson and into the title game. The 41-year-old coach figures to be in the mix for NFL jobs going forward; he just does not wish to make the jump back to the pros at this point.

Based on his NFL experience, Day has taken quite the leap to be considered for a head coaching role. He spent the 2015 season as the Eagles’ quarterbacks coach and followed Chip Kelly to San Francisco, serving as 49ers QBs coach in 2016. Both seasons went off the rails quickly, and Day latched on as Ohio State’s co-offensive coordinator. He pulled his name out of the Titans OC search in 2018 — for a job that went to Matt LaFleur — and became Ohio State’s head coach in 2019. Ohio State is 23-1 under Day.

2 comments on “Ryan Day Not Interested In NFL Jobs”