Jan. 10: Campbell will not, in fact, take an interview with the Jets, according to Bruce Feldman of The Athletic (via Twitter). As Tony Pauline of Pro Football Network recently said, Campbell will only leave Iowa State for a perfect situation, with the implication being that the New York job does not qualify as such.

Jan. 9: Rumored to be on the NFL radar for multiple offseasons, Iowa State head coach Matt Campbell looks set to interview for at least one job in the near future. 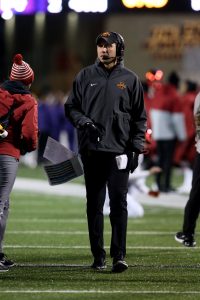 Jets owner Christopher Johnson and GM Joe Douglas are each high on Campbell, and CBS Sports’ Jason La Canfora notes the Jets are expected to meet with him soon. Campbell has been on the Jets’ radar for a while, and in Douglas’ first coaching search, the team is casting a wide net. This would mark Campbell’s first known NFL interview.

Prior to hiring Adam Gase, the Jets reached out to Campbell in early 2019 to see about an interview then. Campbell, however, declined the request. He signed an extension with Iowa State later that year. However, the 41-year-old coach is now intrigued by the prospect of making the college-to-NFL jump.

Campbell has authored four straight winning seasons in Ames, Iowa. His Cyclones rebuild peaked during this pandemic-altered season, with the team ending its season with a 9-3 record. Despite the pandemic trimming a game off Iowa State’s schedule, the nine wins matched a program record.

Campbell, Northwestern’s Pat Fitzgerald and former national championship-winning HC Urban Meyer are the latest coaches on the college-to-pro radar. Were one of them to make the move, this would mark the third straight offseason a college coach landed a pro job — after Kliff Kingsbury and Matt Rhule. The Jets were interested in Rhule before hiring Gase, but the now-Panthers HC opted to stay at Baylor in 2019.