There’s not much optimism that Steve Wilks will retain the Panthers head coaching gig after this season, but it sounds like the organization will at least give him a chance. ESPN’s Jeremy Fowler writes that people around the NFL believe Wilks is a “long shot for the long-term job.” 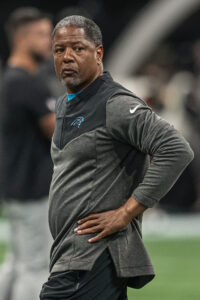 However, Fowler cautions that the Panthers have held off on the hiring process as they look to give Wilks a legitimate chance to keep the full-time gig. Meanwhile, Joseph Person of The Athletic writes that owner David Tepper will use the final five games to determine Wilks’ future with the organization.

While sources believe Tepper could be targeting an offensive-minded coach, there’s plenty going for Wilks. Tepper is reportedly a fan of the coach, and Wilks has also won over the locker room in recent weeks. The head coach also told reporters that he’s in “constant communication” with the team’s owner, although the discussions generally revolve around “team-related topics” vs. the coach’s future with the squad.

“We don’t get into the future. I’m not about the future right now. It’s about winning the day,” Wilks said recently (via Person). “As I told you guys from Day 1, I’ve got 13 weeks. And I’m gonna try to do it my way within those 13 weeks and whatever happens at the end, we’ll deal with it.”

Wilks was named interim head coach after the Panthers fired Matt Rhule in early October. The Panthers have gone 3-4 with Wilks at the helm despite uncertainty at the quarterback position and the subtraction of star RB Christian McCaffrey. Wilks was a long-time collegiate coach before getting hired by the Bears in 2006. He had a six-year stint with the Panthers before getting hired as the Cardinals head coach in 2018. Wilks went 3-13 in Arizona before getting canned. He was the defensive coordinator with the Browns and Missouri before re-joining the Panthers as their defensive passing-game coordinator and secondary coach for the 2022 campaign.

13 comments on “Latest On Steve Wilks’ Future With Panthers”