Odell Beckham Jr. Not Planning To Work Out For Giants, Bills, Cowboys

Months in the making, Odell Beckham Jr.‘s free agency tour will begin Thursday with a Giants visit. Friday, Beckham will depart for Buffalo, with perhaps his most pivotal meeting — with Dallas, which is viewed as the favorite — set for Monday.

These visits will not involve any Beckham workouts, according to the New York Post’s Paul Schwartz, who notes the eight-year veteran wide receiver is not planning to audition for any of the three teams he will visit. While marquee free agents visiting teams and not working out is nothing new, Beckham’s plan will place a greater emphasis on the interested teams’ medical evaluations. 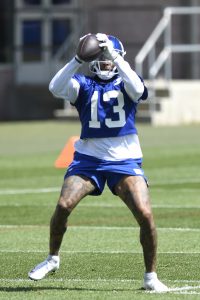 Giants doctors will examine Beckham, who has twice torn his left ACL since October 2020, and this routine will surely continue in Buffalo and Dallas over the next few days. The Giants’ medical evaluation will include an MRI, Ian Rapoport of NFL.com tweets.

Some skepticism regarding Beckham’s capabilities has emerged around the league recently, but the standout pass catcher is believed to have been cleared for work in November. Early December once resided on the latter end of OBJ’s projected return timetable, but his Rams contributions have still convinced teams to wait late into this season.

Beckham, 30, will meet with new Giants power brokers Joe Schoen and Brian Daboll, along with staffers who were with the Giants during his five-season New York stay, and reconnect with John Mara. More serious discussions will be expected to commence Friday, Schwartz adds.

The Giants gave Beckham a five-year, $90MM extension just before the 2018 season began, and while that year did include a bounce back from a lost 2017 season, OBJ’s 1,052-yard campaign also happened during a season in which he criticized Eli Manning in a TV interview. The then-Dave Gettleman-led Giants regime traded Beckham to the Browns in March 2019. Among the players exchanged in that deal, only Dexter Lawrence remains with one of those teams.

As for Beckham’s fit with the Schoen-Daboll Giants, he would slide in as a potentially lethal X-factor — depending on his readiness and grasp of Daboll’s system — and help a Giants team that has seen its receiver plan change drastically from September. Ex-Beckham teammate Sterling Shepard is out for the season; so is second-round pick Wan’Dale Robinson. Kadarius Toney is now in Kansas City, and Kenny Golladay‘s $18MM-per-year pact has produced next to nothing. Months-long trade candidate Darius Slayton, who was drafted a month after the OBJ trade, is now Daniel Jones‘ No. 1 target.

Jones and Beckham never played together, but if OBJ returns to the Big Apple, he would be a critical aid to the fourth-year quarterback and the team’s quest to return to the playoffs for the first time since 2016. That season marks Beckham’s most recent Pro Bowl year. Despite injuries and a poor Cleveland fit, he has remained on the star tier. Teams’ offers during this unique free agency derby will be telling. Beckham is believed to be seeking a multiyear commitment.

45 comments on “Odell Beckham Jr. Not Planning To Work Out For Giants, Bills, Cowboys”