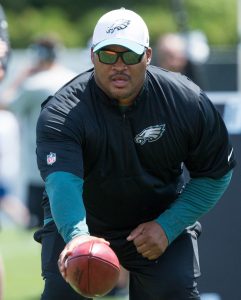 Duce Staley has been an Eagles assistant for 10 seasons, but the franchise’s longtime running backs coach has landed on the Bears’ radar.

The Bears are interested in the former NFL starter-turned-HC candidate, Adam Jahns of The Athletic tweets. While Staley arrived in Philly before Doug Pederson, he worked with Matt Nagy‘s former Chiefs coworker for five seasons.

The Eagles will likely bring in a host of new assistants after hiring Colts OC Nick Sirianni as their Pederson replacement. Staley was on the radar for the job Sirianni landed but did not seem to gain much traction during Philadelphia’s search. He was also passed over for Philly’s OC position when the team promoted Mike Groh in 2018.

Nagy has seen two of his offensive assistants — QBs coach Dave Ragone and running backs coach Charles London — defect to the Falcons this week. London will be Atlanta’s new QBs coach, working under new Falcons OC Ragone. Nagy will need to replace these staffers, and Staley has extensive experience as an offensive staffer.

Philadelphia’s RBs coach since 2013, Staley began his career at the quality control level two years prior. He worked under Pederson, Chip Kelly and Andy Reid. The Eagles tabbed him as their acting head coach during Pederson’s bout with COVID-19 last summer. But with Sirianni coming in, it is unclear if Staley remains in the Eagles’ plans or if he would want to continue working as a position coach with another new Eagles HC.

Monday was a pivotal day in Eagles franchise history, as the team fired Super Bowl winning coach Doug Pederson. There’s been a lot trickling out since then, and we’re here to bring you all the fallout from the decision:

Eagles head coach Doug Pederson will spend some time away from the team after testing positive for COVID-19 (Twitter link via Tim McManus of ESPN.com). In the interim, assistant head coach Duce Staley will assume HC duties at the team’s complex, as Jeff McLane of the Philadelphia Inquirer tweets.

Pederson, 52, has not experienced any symptoms, but he’ll quarantine to avoid spreading the virus, per the protocols. The league’s guidelines mandate multiple tests for Pederson before he can get back to work.

Person is the second head coach known to have contracted the coronavirus, following Sean Payton‘s positive test earlier this year. Payton’s recovery was relatively quick – he tested positive on March 16 and he was cleared before the end of the month.

“You fatigue real easy,” Payton said of his experience with the virus. “I’d be up moving around, doing something, then you’d want to lay down again. That lasted three or four days. By the time I got the test results back I had begun feeling better. I had my appetite back.”

Pederson is set to enter his fifth year as the Eagles’ head coach. Staley, a longtime Eagles running back, joined the team as an assistant in 2011 and worked his way up to AHC in 2018.

Despite being an Eagles coach for the past seven seasons, Duce Staley did not receive the promotion he sought this offseason. Philadelphia opted to name Mike Groh as Frank Reich‘s offensive coordinator replacement after interviewing both Groh and Staley.

However, Staley may well have participated in another key interview this offseason. The Eagles’ running backs coach met with the Giants about their offensive coordinator position, Marcus Hayes of the Philadelphia Inquirer reports.

This is the first report of Staley interviewing for that role, one Pat Shurmur initially sought Vikings QBs coach Kevin Stefanski for but was denied permission. Staley was mentioned as a candidate for Big Blue’s OC position earlier this offseason prior to the job going to former Panthers OC Mike Shula. Nevertheless, he’s back on as RBs coach, now with an assistant head coach title, for the defending Super Bowl champions. This will be his sixth season in that role.

“I’m not worried about being a coordinator. I’m worried about being able to be out there and coach for another Super Bowl,” Staley said, via Hayes, changing his tune slightly from last year around this time. “That’s where I’m at right now. Everything else will handle itself.”

Hayes notes Staley wants to be a head coach and knows the OC route would be the easiest way for him to accomplish that goal, and the 43-year-old assistant did not dismiss a possible interest in going the college route to help get there.

But for now, the former Eagles running back is hoping his work leading their current backs will speak for itself and potentially land him a higher-profile job in the near future.

“Crazy league. Crazy situations,” Staley said. “You talk about being at the right place at the right time. Sometimes things are slotted, and they may not be slotted for you. Sometimes something may just pop up on you.

Also an NFL running back in the ’90s, Lynn saw Greg Roman‘s ouster as Bills OC in 2016 lead to a promotion. And a few months later, the Chargers hired him as their head coach. A running backs coach since 2003, Lynn has several years of additional coaching experience compared to Staley. But with the Eagles losing both Reich and John DeFilippo this offseason, Staley could have a smoother path to an OC gig elsewhere if Philly’s offense continues to thrive.

Eagles wide receiver Alshon Jeffery had surgery on Wednesday morning to fix a torn rotator cuff, sources tell Ian Rapoport of NFL.com (on Twitter). Jeffery first suffered the injury in training camp and played through the pain all the way to a Super Bowl championship.

Jeffery’s toughness is commendable, but rotator cuff tears come in various degrees and his wasn’t of the most severe variety. By getting the surgery in February, the receiver should be ready well in advance of training camp.

Last offseason, the Eagles signed Jeffery to a one-year prove-it deal when the open market didn’t yield the kind of contract offers he wanted. The contract paid big dividends for both sides. The Eagles saw Jeffery catch 57 passes for 789 yards and nine touchdowns during the regular season. Jeffery, meanwhile, was rewarded with a fat four-year, $52MM extension in December.