Todd Bowles will apparently be a popular name on the head-coach circuit. NFL Network’s Mike Garafolo reports (via Twitter) that the Lions requested an interview with the Buccaneers defensive coordinator. The interview hasn’t been scheduled as the two sides await the outcome of Tampa Bay’s playoff game tonight. Garafolo notes that Bowles is also expected to meet with the Falcons about their head coach opening. 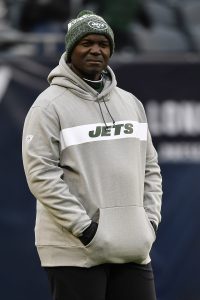 Following his stint as HC of the NYJ, Bowles caught on as the defensive coordinator down in Tampa Bay in 2019. His first season in the role saw the unit rank sixth in defensive efficiency, and the team improved to fifth in the same metric in 2020. This year’s squad also ranked top-1o in takeaways, sacks, points allowed per game, and yards allowed per game (all despite having only one Pro Bowl defender in Jason Pierre-Paul). Of course, Bowles defensive prowess isn’t in question; he previously led stellar units in Arizona, and his Jets defenses weren’t all that bad. What was bad was his record as head coach; in four years with the Jets, Bowles had only 24 wins (and that included a 10-win campaign in 2015).

Both the Lions and Falcons are searching for new head coaches following in-season firings to Matt Patricia and Dan Quinn (respectively). Both teams have interviewed Chiefs OC Eric Bieniemy and Titans OC Arthur Smith, and they’re both considering their interim coaches (Darrell Bevell and Raheem Morris, respectively). Northwestern head coach Pat Fitzgerald has also emerged as a candidate for both jobs.

For Tampa Bay, it’s sounding like the coaching staff could be seeking a new defensive coordinator once their season has come to an end. Greg Auman of The Athletic opines (on Twitter) that defensive line coach Kacy Rodgers or linebackers coach Larry Foote could take over in Bowles’ stead, although Auman also cautions that either of those coaches could join Bowles’ staff if he’s hired elsewhere.