The NFL will have to wait. On Sunday, Lincoln Riley confirmed that he is leaving the University of Oklahoma to become the next head coach of the USC Trojans.

“Leaving OU was probably the most difficult decision of my life,” said Riley in a statement issued by Oklahoma. “OU is one of the best college football programs in the country, and it has been forever…This was a personal decision solely based on my willingness to go take on a new challenge, and I felt like it was the right opportunity for me and my family to do that.”

Not long ago, many believed that Riley’s next challenge would come in the professional ranks. Multiple NFL clubs have shown interest, including the Eagles earlier this year, before they settled on Nick Sirianni.

Riley has amassed a 55-10 record since taking over for Bob Stoops in 2017. Though the National Championship has eluded the Sooners, Riley’s work with No. 1 overall picks Baker Mayfield and Kyler Murray made him a hot NFL candidate. Riley’s still just 38 years of age, so he could make the leap sometime in the future. For now, he’s headed to Southern California while Stoops resumes his old job in an interim capacity.

In related news, Oklahoma has interest in Kliff Kingsbury, but it’s hard to imagine him leaving the first-place Cardinals. 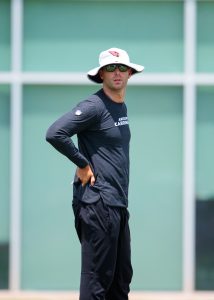 The Eagles contacted University of Oklahoma head coach Lincoln Riley hours after firing Doug Pederson, according to Geoff Mosher of Inside The Birds. We’ve heard Riley’s name come up in recent years, but the Eagles are the first team in this cycle to reach out to him directly.

Riley has amassed a 45-8 record since taking over for Bob Stoops in 2017. Though the Sooners came up short in the postseason, Riley’s work with No. 1 overall picks Baker Mayfield and Kyler Murray has put him squarely on the pro radar. Riley also coached Eagles starting QB Jalen Hurts, making him a logical candidate for Philly.

“In terms of the characteristics, I’d rather not specify, but I can tell you no matter who we have, it needs to be a leader of coaches, a leader of players and someone who represents the organization in a great leadership way,” owner Jeffrey Lurie said on Monday. “I think there’s a couple ways to skin that cat. You can hire somebody really steeped in offense or you’ve seen great offenses coached by head coaches coming from the defensive side.

“I don’t think there’s any predilection for one over the other, but I do think somebody that is constantly curious of where the league is headed and what you need to do to have really good units and again, without a really good elite offense, I tend to err on that side. But not that side of the ball for head coach. Doesn’t matter.”

The Eagles may also consider Chiefs quarterbacks coach Mike Kafka for the vacancy. Kafka, like Pederson, comes from the Andy Reid coaching tree. The Eagles even wanted to hire him as their offensive coordinator a year ago, but Reid blocked the move.

The Texans fired head coach/general manager Bill O’Brien last month following an 0-4 start, and interim HC Romeo Crennel has righted the ship a bit. Under Crennel’s watch, Houston is 2-2, and while those two wins came against the lowly Jaguars, the Texans came within an eyelash of toppling the Titans in Week 6.

Crennel, 73, has been viewed as a placeholder for 2020, but he could retain the gig through the 2021 season, as Ian Rapoport of NFL.com writes. COVID-19 restrictions will probably not permit a traditional in-person search this offseason, so teams hiring a new HC could be committing a boatload of money to a person they have never even met. As such, the Texans might stick with Crennel next season and seek their long-term answer the following year. If that happens, VP of football operations Jack Easterby may continue serving as GM.

Of course, the team has been connected to Chiefs OC Eric Bieniemy, who is a favorite of QB Deshaun Watson. Bieniemy is widely expected to secure a head coaching job this offseason regardless of travel restrictions, so if Houston wants him, it might need to take a leap of faith. And John McClain of the Houston Chronicle says the Texans will indeed hire a new GM and HC at season’s end, while fellow Houston Chronicle scribe Aaron Wilson says the search remains active (Twitter links). 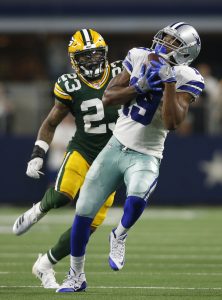 Cowboys Could Consider Coaching Change In 2020

Cowboys owner Jerry Jones has insisted that head coach Jason Garrett is not in danger of losing his job this year, but as Jason La Canfora of CBS Sports writes, Garrett’s future in Dallas beyond 2019 is still very much in doubt.

Of course, that isn’t a huge surprise given that Garrett’s contract expires at the end of the current campaign. Jones was perfectly content to let Garrett coach through a lame-duck season and revisit the situation next year, and he is fully expecting a strong playoff run.

Jones apparently views the Cowboys, who have lost two straight after running off three consecutive wins to start the season, as a legitimate championship contender. As such, Garrett may have to win at least one playoff game to land a new contract with the Cowboys.

Garrett has been on the hot seat several times during his Cowboys tenure, but he has still managed to hold onto his post since he was given the permanent HC title in 2011. And, now that Sean Payton has signed an extension with the Saints, one of the biggest threats to his job is off the market.

However, Jones is intrigued by Oklahoma head coach Lincoln Riley, who has seen his name come up in plenty of NFL coaching rumors before. Riley, though, is reportedly willing to seriously consider opportunities in the professional ranks in 2020, and obviously the Dallas gig is one of the most high-profile jobs around.