Brian Daboll could soon be heading to the west coast. ESPN’s Adam Schefter reports that the Bills offensive coordinator “has emerged as a favorite” for the Chargers head-coaching gig. 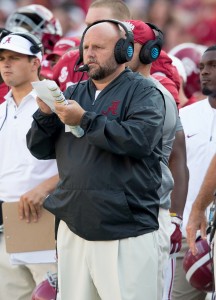 Predictably, the Chargers organization is waiting to see how tonight’s Bills game goes before making any moves. If Buffalo loses, Los Angeles can offer Daboll the job as soon as possible. If the Bills win, then the organization has to wait until Buffalo is eliminated before they can negotiate a contract with their new head coach.

As Schefter notes, there are two logical reasons why Daboll has emerged as the leading candidate for the vacancy. For starters, Daboll received a lot of credit for Josh Allen‘s emergence this season, and the Chargers are hoping the coach can help Justin Herbert take the next step. Daboll also went to high school and played football with Chargers general manager Tom Telesco, so there’s an obvious connection there.

Daboll, 45, started his NFL coaching career back in 2000 with the Patriots. He got his first coordinator gig with the Browns in 2009, and he’s since held the same role with the Dolphins, Chiefs, and the Bills (along with Alabama). Daboll was mentioned as a candidate for the Jets vacancy, and he was one of the nine reported candidates for the Chargers job. As our 2021 NFL Head Coaching Search Tracker shows, that list includes: