The Cowboys are widely expected to be shopping for a new head coach this offseason, and the team’s interest in Urban Meyer is real, as Albert Breer of SI.com writes. Recent reports indicated that Cowboys owner Jerry Jones was zeroing in on Meyer and Patriots OC Josh McDaniels — though Oklahoma HC Lincoln Riley could also be a legitimate possibility — and Meyer himself said he would “absolutely” accept the Dallas gig if offered. 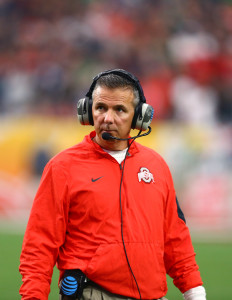 Breer confirms that Meyer is interested in the Cowboys, and while the SI scribe does not believe Meyer is necessarily dying to get back into coaching, Dallas does check two important boxes for him. One, it’s a flagship organization, and two, it has a roster that looks capable of competing right away. Meyer also has a close relationship with one of the Cowboys’ best players, Ezekiel Elliot, thanks to their days at Ohio State together.

Meyer is undoubtedly one of the most accomplished head coaches in college football history, having compiled a 187-32 career record that includes a whopping 12-3 mark in Bowl Games. He also won three national championships, two with Florida and one with Ohio State.

His success with the Buckeyes led to some NFL interest, and he said in December 2015 that he had recently spurned an NFL team’s advances. He always seemed content with his collegiate job, but he announced last December that he would retire from coaching after the Buckeye’s Rose Bowl game on January 1, 2019 (which Ohio State won). He cited health concerns as the reason for his decision, which leaves one to wonder if he would welcome the rigors of an NFL post. However, since Dallas does not need to go through a lengthy rebuild, Meyer seems open to considering the opportunity.

30 comments on “Cowboys’ Interest In Urban Meyer Is “Real””