Awful news out of Denver. During Wednesday’s practice, Broncos wide receiver Emmanuel Sanders suffered a torn Achilles tendon, according to Mike Klis of 9News (on Twitter). 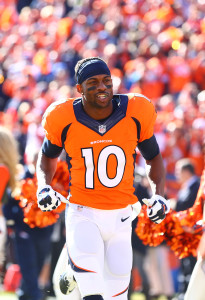 Sanders is the team’s top receiver and losing him is a huge blow to the team’s playoff hopes. The 6-6 Broncos are riding a three-game winning streak, but they’ll have to make their late season push without the help of their best offensive weapon.

Prior to the injury, Sanders hauled in 71 catches for 868 yards and four touchdowns. Statistically speaking, he was on pace for his second-best season behind a 2014 campaign in which he had 101 catches for 1,404 yards and nine TDs.

The Broncos have lost three other starters (center Matt Paradis, left guard Max Garcia, and tight end Jeff Heuerman) to IR over the past month and cornerback Chris Harris could be next depending on how fast he can recover from a fractured fibula. The Broncos have an easy draw in the 2-10 49ers this weekend, but they’ll be at half-strength for the rest of the regular season, including a Week 17 matchup against the Chargers.

In hindsight, the Broncos may or may not regret their midseason trade of Demaryius Thomas. Of course, hindsight is 20/20, and the Broncos will have to bank on youngster Courtland Sutton even more going forward. It’s likely that Tim Patrick will line up on the opposite side of Sutton the rest of the way with DaeSean Hamiton stepping into Sanders’ role.

Sanders, 32 in March, is under contract through next year with a cap number of $12.9MM. It’s worth keeping an eye on his recovery – which often takes 7-8 months – as the Broncos can release him with just $2.687MM in dead money.