The Chiefs announced that they’ve signed offensive lineman Austin Reiter to an extension. Kansas City did not provide the length or terms of Reiter’s new deal. 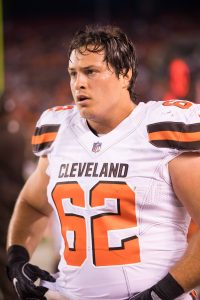 Reiter, 27, was projected to become a restricted free agent next spring. Restricted free agent tenders are only one year in length and don’t offer any guarantees until the regular season begins, so Reiter may have sacrificed some immediate earning power in exchange for financial security. Reiter almost surely wouldn’t have been offered a first-rounder tender, but a second-round tender (which should be worth roughly $3MM) wouldn’t have been out of the question. A 2019 right of first refusal tender should be worth ~$2MM, so it won’t be surprising if Reiter’s annual salary/guarantees comes in somewhere between those $2MM and $3MM figures.

Originally a seventh-round pick of the Redskins in 2015, Reiter saw two seasons of action with the Browns from 2016-17 before the Chiefs claimed him off waivers this past September. Reiter has made four starts for the Chiefs this year while filling in for the injured Mitch Morse, and earned spectacular grades from Pro Football Focus while handling the pivot. While small sample size is a factor (Reiter has played only 175 offensive snaps), PFF currently ranks him as the No. 10 center in the NFL.

Reiter moved to backup duty when Morse returned in Week 13, and he’ll remain there barring another injury. But given what should be cheap annual rates on his contract, Reiter could prove to be valuable depth. He becomes the second ex-Browns offensive lineman to sign an extension with the Chiefs this year, joining former Cleveland first-rounder Cameron Erving.