END_OF_DOCUMENT_TOKEN_TO_BE_REPLACED

Former Jaguars, Cowboys and Bills defensive end Ryan Davis has signed with the Rams, a league source tells Mike Kaye of First Coast News (on Twitter). Details of the deal are not yet known. 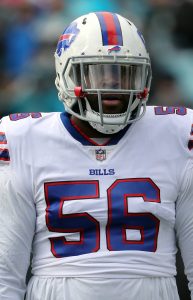 Davis, 29, appeared in all of the Bills’ regular-season contests last season, as well as their postseason game, and recorded three sacks. In March, the Bills released him in order to escape his $1.28MM cap hit for 2018.

The Rams are not short on front seven talent, but it never hurts to look at depth options when rosters are still at their 90-man max. In their 3-4 set, the Rams project to start Ndamukong Suh, Michael Brockers, and Aaron Donald up front with Ethan Westbrooks and fourth-round pick John Franklin-Myers serving as the top defensive ends off of the bench. Westbrooks and Franklin-Myers are virtual locks for the roster, but Davis may be able to creep in behind them.

Davis recorded a career-high 6.5 sacks in 2014, but has not been able to replicate that performance over the last three years. He’ll try to get back on track and make the cut in L.A. this summer. 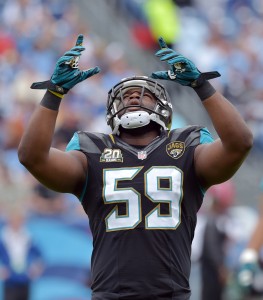 Ryan Davis‘ 2016 season stabilized to a degree after being a surprise training camp cut, but he will not have a chance to play for the Cowboys during the playoffs. The team placed the pass-rusher on IR and signed Richard Ash off the Jaguars’ practice squad to fill the roster spot.

Davis did not see the kind of playing time in Dallas as he did in Jacksonville in recent years, but he saw action in nine games for the NFC’s No. 1 seed. Mostly used as a special-teamer, Davis recovered a fumble and made just four tackles in his fifth season.

The Jaguars made Davis a rather curious camp cut after placing a second-round tender ($2.55MM) on the then-RFA in March. He played in 30 games for the Jags in 2014-15 and combined to record 10 sacks in that span. Jacksonville moved Davis to linebacker this offseason after using him as an off-the-bench defensive end previously. He signed for $675K to play for the Cowboys in September.

Ash resided behind Davis in the Jags’ defensive line hierarchy, spending most of his two-year stay in Jacksonville on the struggling teams’ practice squads. The second-year UDFA has played in one game in each of the past two seasons.

After working out 14 players on Tuesday, the Cowboys have emerged with a defensive end. Aaron Wilson of the Houston Chronicle tweets that the team has signed Ryan Davis.

ESPN.com’s Todd Archer notes that the veteran had tried out for the team earlier this afternoon.

Davis, an undrafted rookie back in 2012, spent his first four NFL seasons with the Jaguars. While the former Bethune-Cookman standout never started a game, he still managed to produce some impressive numbers during his tenure in Jacksonville. Over the past three seasons, Davis has 11 sacks, including 6.5 during the 2014 season. The 27-year-old was released by the Jaguars earlier this month.

With the ability to play both linebacker and defensive end, Davis should surely carve out a role on this squad. Plus, as Archer points out, Davis’ 11 career sacks are the most on the entire roster, topping Orlando Scandrick‘s 10.5 sacks. Davis will presumably compete with Charles Tapper and Jack Crawford for snaps on the defensive line, and he’ll go against Keith Smith, Mark Nzeocha, Andrew Gachkar, Justin Durant, and Damien Wilson for action at linebacker.