END_OF_DOCUMENT_TOKEN_TO_BE_REPLACED

Jamaal Charles‘ stay with a third NFL team did not last long. The Jaguars are releasing the two-time All-Pro running back, Ian Rapoport of NFL.com tweets. 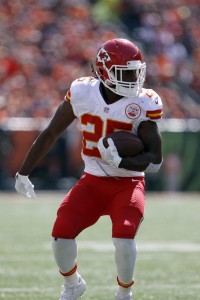 Jacksonville added Charles to help a backfield missing starter Leonard Fournette. But the team clearly didn’t feel its sans-Fournette running back situation was strong enough, deciding to unload a fifth-round pick for Hyde, who will be set to debut for his new team on Sunday in London.

The Chiefs’ all-time rushing leader and one of the best yards-per-carry runners in NFL history, Charles will return to free agency. He’d resided there since the Broncos let him walk in the offseason. The 31-year-old back gained seven yards on those six carries and appears to be near the end of a decorated NFL career.

DeLuca will join a Jags team that saw reserve linebacker Donald Payne suffer a knee injury in Sunday’s loss to the Texans.