The Jaguars have signed defensive tackle Sealver Siliga, according to agent David Canter (Twitter link). Details of the deal are not known, but it’s likely a one-year pact with little or no guaranteed money involved. 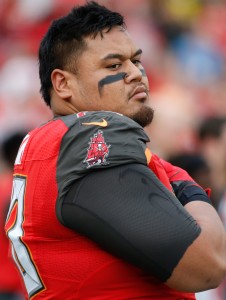 After re-signing with the Bucs on a one-year deal worth up to $1.5MM, Siliga appeared in eight games as a reserve with eight total tackles. He had a workout with Lions last month, but it has been a quiet offseason for him otherwise.

Although he hasn’t done a whole lot in the past two years with Tampa Bay, Siliga has seen significant playing time in the past. Between 2014 and 2015, Siliga started nine games (in 20 appearances) for the Patriots, collecting 60 tackles and 2.5 sacks.

With the Jaguars, Siliga will fight for a roster spot behind starting defensive tackles Marcell Dareus and Malik Jackson. First-round pick Taven Bryan projects to be the first defensive tackle off of the bench and Abry Jones should be in line for playing time, but the competition is fairly open after that.

Could the Browns entertain the idea of signing Dez Bryant? In the wake of Josh Gordon‘s latest setback, Ian Rapoport of NFL.com (video link) wonders aloud if the Browns could call on Bryant to fill the void. The Browns certainly have the cap space to sign Bryant, but it’s not immediately clear whether there’s interest or whether Gordon’s situation will necessitate a signing. For now, all we know is that the Browns have placed Gordon on the NFI list and he is not under suspension from the NFL. Not yet, at least.

Here’s more from the AFC and NFC North:

Let’s take a look at the details of some recently signed free agent contracts:

The Buccaneers have agreed to re-sign defensive tackle Sealver Siliga, according to
Greg Auman of the Tampa Bay Times (Twitter link). It’s a one-year deal, tweets

Tampa Bay claimed Siliga off waivers last November after he was waived by the Seahawks. In six games with the Bucs, the 27-year-old compiled five tackles and one sack. Between 2014 and 2015, Siliga started nine games (in 20 appearances) for the Patriots, collecting 60 tackles and 2.5 sacks. Last offseason, the defensive tackle earned a one-year, $1.4MM ($250K guaranteed) contract from Seattle.

Siliga will presumably compete with Clinton McDonald to be the primary substitute for starting defensive tackles Gerald McCoy and Chris Baker.