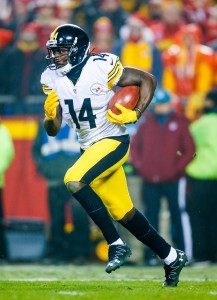 The Chiefs signed Coates back in February, and he only lasted a few months with his latest team. Coates entered the league as a third round pick of the Steelers back in 2015, and he initially showed some promise in Pittsburgh. In 2016 he started five games, and racked up 435 yards and two touchdowns.

He then got injured and was subsequently buried in Pittsburgh’s deep wide receiver group, so he was traded to the Browns just before the start of the 2017 season. He appeared in 12 games and started one in Cleveland, but ended up catching just six passes for 70 yards in Cleveland’s winless year.

After being released last March he latched on with Houston, and spent most of 2018 with the Texans. He caught only one pass last year, and the fact that he couldn’t stick on a 90-man roster through May isn’t a great sign for his NFL future. His phone won’t be ringing off the hook.

The Chiefs have signed quarterback EJ Manuel and wide receiver Sammie Coates, according to a team announcement. They also inked receiver Davon Grayson and defensive back Dontae Johnson.

Manuel, 29 in March, has not suited up since his 2017 season with the Raiders. Before that, the former first-round pick spent the first four years of his career with the Bills. All in all, Manuel has a career 6-12 record, a 58.1% completion percentage, and 20 touchdowns against 16 interceptions. The Florida State product has not lived up to his draft billing so far, but he’ll look to impress in Kansas City and stick as a backup to star Patrick Mahomes.

Coates, 26 in March, made some noise with the Steelers as a youngster but has not done a whole lot over the last two years. He had six catches for 70 yards with the Browns in 2017 and had just one catch for 12 yards in his run with the Texans last year. Coates auditioned for the Colts and Cowboys towards the end of the 2018 season, but did not sign with either club.

Many current and former players, as well as some team owners, have spoken out about the NFL’s Marijuana policy and called it archaic. After years of players facing lengthy suspension for using the substance, it appears change could finally be on the way. The league hopes to get rid of the ban on players smoking Marijuana, according to Mike Florio of ProFootballTalk.com, but there is a catch.

Florio reports that the league doesn’t just want to change the policy on their own, but they instead want to “dangle” potential changes in the next collective bargaining agreement to secure “a concession from the union in exchange for softening a policy that badly needs to be softened.” The next CBA negotiations are expected to be highly contentious, and there have been rumors another lockout could be on the way, so it’s not surprising the league wants every bit of leverage they can get.

The Cowboys are kicking the tires on wide receiver Sammie Coates, according to Todd Archer of ESPN.com (on Twitter). Coates was cut loose by the Texans earlier this week and was not claimed on waivers, making him a free agent. 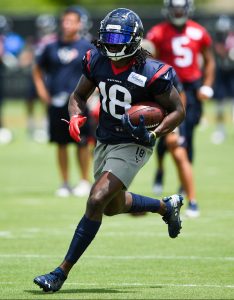 Coates had one catch for 12 yards this year and mostly played on special teams for Houston. That’s likely to be his role in Dallas, if signed, though he could have an opportunity to do more since Tavon Austin is still working his way back from a groin strain.

Coates’ best season to date came in 2016 with the Steelers when he had 21 catches for 435 yards and two scores. In 2017, however, he had just six catches for 70 yards and zero touchdowns for Cleveland and his production dipped even further this year. Coates’ 37 snaps this year marked a career low.

The 8-6 Cowboys have a 94% chance of winning the NFC East, according to FiveThirtyEight. If they win at least one of their final two games, they’ll clinch the division and a playoff berth.

Texans wide receiver Sammie Coates has been released, according to a source who spoke with Aaron Wilson of the Houston Chronicle (on Twitter). came to Houston after being waived by the Browns in March, but he was hardly used in 2018.

Coates’ best season to date came in 2016 with the Steelers when he had 21 catches for 435 yards and two scores. In 2017, however, he had just six catches for 70 yards and zero touchdowns for Cleveland. His production dipped even further this year with the Texans as he had just one catch for 12 yards.

Coates’ 37 snaps this year marked a career low and the former third-round pick is undoubtedly frustrated with how things have gone over the last couple of years. Still, he handled his exit from Houston with class.

Coates will hit the waiver wire, making him and his contract available to the league’s other 31 teams. If he is not claimed within 24 hours, he will be an unrestricted free agent.

The Texans, meanwhile, will work to clinch the division without Coates on the depth chart. They have two games left against the Eagles and Jaguars, and they’ll sew up the AFC South with a win in either contest. The Texans can also clinch the division this week even if they fall to Philly if the Titans and Colts both lose their respective games.

The Texans have claimed wide receiver Sammie Coates off waivers from the Browns, as Jeremy Fowler of ESPN.com tweets. Because Coates is not a vested veteran, he hit the waiver wire instead of unrestricted free agency. 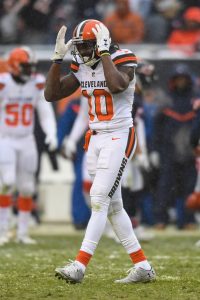 With a 4-12 record, the Texans are fourth in the league’s waiver wire order, behind only the Browns, Giants, and Colts. It’s not immediately clear if any other teams attempted to claim Coates, but the Texans had the advantage over 27 other clubs.

Coates had just six catches for 70 yards with no touchdowns last year for Cleveland. His best season to date came in 2016 with the Steelers when he had 21 catches for 435 yards and two scores.

The Texans currently have Will Fuller, Braxton Miller, and Bruce Ellington as their top receivers after star DeAndre Hopkins. The Texans have nine receivers under contract in total, but there is certainly a chance for him to stick and make the final cut.

While Coates prepares to battle for a spot with the Texans, former Steelers teammate Markus Wheaton is on the market and meeting with the Seahawks. 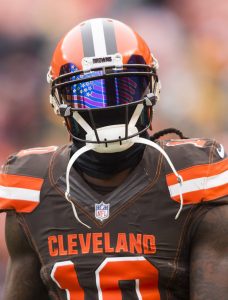