The Rams have released running back Lance Dunbar, according to Ian Rapoport of NFL.com (on Twitter). Dunbar, 28, was already due to reach free agency on Wednesday.

Dunbar played sparingly in his first and only season with the Rams, appearing in just four games and attempting 11 carries. For what it’s worth, he averaged 4.6 yards per tote in that extremely limited sample. He also had a rushing touchdown and a receiving TD.

Dunbar spent the first five seasons of his career with the Cowboys and played mostly in a reserve role. He lost the bulk of the 2015 season to an ACL tear and sat out most of 2017 with knee pain.

Gunning for their first playoff spot in 13 years, the Rams will soon have an additional option in their backfield. Los Angeles activated running back Lance Dunbar on Saturday, Rich Hammond of the Orange County Register reports (on Twitter). 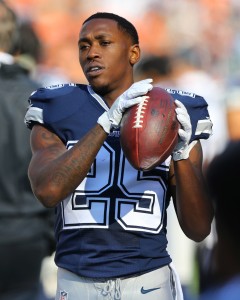 Dunbar spent the first half of the season on the PUP list, with knee pain sidelining the former Cowboys passing-down back. Dunbar returned to practice last week, and the Rams didn’t have to make a decision on him just yet due to NFL rules, but he will join Todd Gurley in a blossoming offense beginning in Week 10.

Dunbar will effectively replace Malcolm Brown in the backfield. Brown suffered an injury recently that will shelve him for some time.

The Rams signed Dunbar to a one-year deal in March. He returned from a 2015 ACL tear last season and played in 13 games for the Cowboys. However, Ezekiel Elliott‘s arrival changed Dallas’ backfield arrangement and limited outside opportunities. Gurley could have the same effect on Dunbar in L.A. The Rams have used their starter as a three-down back. But Dunbar returning will at worst provide insurance while outfitting Sean McVay with another weapon in passing situations.

A quick look at the Raiders and Rams:

While the Rams’ resurgence has been one of the NFL’s top stories this season, the team hasn’t been operating quite at full strength on offense.

Expected to play an auxiliary role in Los Angeles’ offense, Lance Dunbar has yet to debut for his new team. But the veteran running back returned to practice this week, Vincent Bonsignore of the Los Angeles Daily News tweets.

The Rams have three weeks to activate Dunbar from the PUP list or place him on IR. Sean McVay said a decision on that could come soon despite the three-week window available to the team.

Signed to a one-year deal in March, Dunbar began experiencing knee pain and was placed on the PUP list. The Rams have used Todd Gurley as a three-down back to much success in McVay’s offense, and Tavon Austin has taken on some of the responsibilities Dunbar was to possess. ESPN.com’s Alden Gonzalez isn’t certain if the sixth-year veteran will have a role, so an IR trip or a release could be in play here.

The Rams, though, don’t have an abundance of backfield depth, with UDFAs Malcolm Brown and Justin Davis stationed behind Gurley on the depth chart. Dunbar played in 13 Cowboys games last season but missed most of Dallas’ 2015 season due to a torn ACL.

The Rams and running back Lance Dunbar agreed to a one-year deal, a source told Adam Caplan of ESPN.com (on Twitter). The contract could pay him up to $3MM, Caplan adds. It’s presently unclear how much Dunbar gets in guarantees and base pay.

Dunbar was third on the Cowboys’ depth chart last season behind star Ezekiel Elliott and veteran Alfred Morris. Morris remains under contract in Dallas, so there wasn’t much of an opportunity for Dunbar to get playing time there in 2017. The Cowboys either didn’t make a strong effort to retain Dunbar or, at minimum, any push to keep him didn’t make it to the press.

In 2016, Dunbar had just nine carries and 16 receptions. Now, in sunny Los Angeles, he could be the clear-cut No. 2 running back, depending on what the team does between now and training camp. Todd Gurley will be the starter but the only other tailbacks on the roster are former undrafted free agents Malcolm Brown and Aaron Green. With his pass-catching skill, he could play a role similar to Chris Thompson in Sean McVay‘s former Redskins offense. 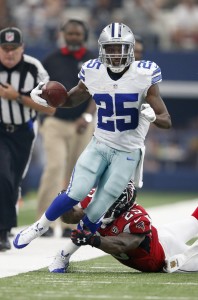 Dunbar was buried on the Cowboys’ depth chart last season and had just nine carries on the year with one score. He added 16 catches for 122 yards. Dunbar was never a starter in his five years for the Cowboys, but that was the least amount of burn he ever received in a healthy season. Even when he played in only nine games in 2013, he still managed to get 30 carries (he averaged 5.0 yards per carry in that limited sample).

The Rams could use some depth behind Todd Gurley. Currently, he has Malcolm Brown and Aaron Green – a pair of former undrafted free agents – as his understudies. Dallas’ level of interest in a reunion is unclear, but if Dunbar were to return, he would be stuck behind Ezekiel Elliott and Alfred Morris.