2022 will be an important season for the Bears, with Matt Eberflus and Ryan Poles taking over as head coach and general manager, respectively. It will also be the first full year of Justin Fields being the undisputed starting quarterback. However, as Adam Jahns of The Athletic writes, they could very well find themselves without Pro Bowlers Allen Robinson and Akiem Hicks.

Poles’ stated goal to “be selective in free agency” might not include Robinson or Hicks. The former has made it clear that he was not a fan of ex-HC Matt Nagy in particular, and of the offensive direction of the team more generally. The 28-year-old posted 38 catches for 410 yards and one touchdown last season, a far cry from his 1,100-plus yard seasons in the two previous campaigns.

Robinson signed his franchise tender last year, with many feeling it may be his final season in the Windy City. As Jahns writes, “aligning with a veteran quarterback is arguably in his best interests”, either as part of a long-term deal closer to the $14MM per year he originally agreed to in Chicago, or on a shorter pact to prove he can still play at an elite level.

As for Hicks, frustrations with the franchise could again be a deciding factor in his plans. As Jahns notes, even tough nearly the entire defensive staff has been replaced, the 32-year-old could look elsewhere on the open market – a stark turnaround from preseason reports that he was looking to stay in Chicago. With injuries becoming a concern in recent years, Hicks is still amongst the most disruptive interior linemen in the league, recording seven total sacks in the last two seasons. However, Jahns writes, “Hicks seemed to sense that his time was ending with the Bears” towards the end of the regular season. Regardless of where he ends up, Hicks will likely not be able to match the $12MM annual average he was making on his soon-to-be expired contract.

In the case of both players, Jahns predicts that they will leave in free agency, leaving the Bears to focus on other priorities, such as offensive linemen James Daniels. If Robinson and Hicks do depart, they will leave Chicago with plenty of cap space to work with, but also a significant number of additions needing to be made to rebound from 2021’s disappointing performance. 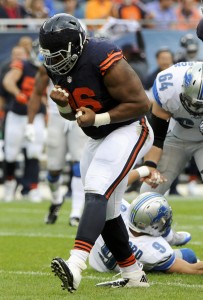 In an eventful week for the Bears, Akiem Hicks emerged on the trade block. The standout defensive lineman is entering the final year of his contract. However, a trade may not end up materializing.

The Bears now look likely to keep Hicks for the 2021 season, according to the Chicago Tribune’s Brad Biggs (on Twitter). Hicks is due a $10.4MM salary next season.

The former All-Pro interior defender is entering the final season of his four-year, $48MM contract. The interior defender market has moved significantly since Hicks signed that deal in September 2017. Most notably, Leonard Williams is now attached to a three-year, $63MM pact. Hicks may push for an extension, with Biggs previously noting his contract was a key matter in a potential trade. As of now, an extension does not appear to be in the cards.

Keeping Hicks would allow the Bears some stability on a defense that just lost top cornerback Kyle Fuller, who officially became a cap casualty Saturday. Hicks has been with the Bears since signing a two-year, $10MM contract in 2016. While Hicks missed most of the 2019 season due to injury, he returned to play 15 games last season. He will turn 32 later this year.

After releasing Kyle Fuller earlier tonight, the Bears are now looking to move on from another veteran defender. Brad Biggs of the Chicago Tribune writes that the Bears have given defensive lineman Akiem Hicks permission to seek a trade.

Hicks is entering the final year of a four-year, $48MM extension he signed with Chicago in 2017. The 31-year-old is set to earn $10.MM in 2021, and Biggs writes that the defensive lineman would want a “substantial raise” if he’s to be traded. Biggs also notes that the requested extension is “unlikely” to materialize.

Hicks spent the first three-plus seasons of his career with the Saints before getting traded to the Patriots in 2015. He joined the Bears on a two-year deal the following offseason, and he quickly established himself as a starter on Chicago’s defensive line. Hicks compiled 23 sacks for the Bears between the 2016 and 2018 seasons, earning a Pro Bowl nod during that latter campaign.

The veteran was limited to only five games in 2019 after suffering an elbow injury, but he managed to start all 15 of his appearances in 2020. He ultimately finished the campaign having collected 49 tackles, 3.5 sacks, and 21 QB hits.

Following the signings of quarterback Andy Dalton and offensive lineman Germain Ifedi (and Allen Robinson‘s decision to opt for the franchise tender), the Bears have been looking for ways to carve out cap space. The team moved on from former All-Pro cornerback Kyle Fuller earlier today.

The Bears have placed defensive tackle Akiem Hicks on injured reserve, according to a team announcement. Hicks has been soliciting medical opinions in recent days and, apparently, he’s been advised to stay off of the field.

This will not be a season-ender like Kyle Long’s injury, at least the Bears do not believe it will be. They are planning to make the impact defensive lineman one of their IR-return players later this season, per Adam Schefter of ESPN.com (on Twitter). Hicks is not expected to need surgery.

Hicks, who made the Pro Bowl last year, is a key cog in Chicago’s elite defense. Last year, he notched 7.5 sacks, a strong follow-up to his career high of 8.5 quarterback takedowns in 2017.

There was some hope that the team’s Week 6 bye would give Hicks some time to recover and return to action quickly. Unfortunately, that’s not the case. The Bears will look to rebound from their London loss to the Raiders on Sunday against the Saints without one of their best players.

Hicks signed a four year, $48MM extension with the Bears in September of 2017, a deal that included $22MM fully guaranteed at signing. Next year, he’s slated to count for an $11.8MM cap hit.