The first of the Dolphins’ two second-round picks is now under contract. The Dolphins and safety Jevon Holland agreed to terms on the customary four-year rookie deal Friday. 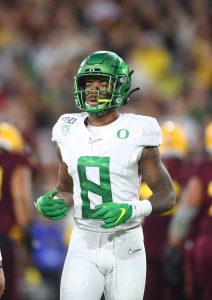 Miami selected Holland 36th overall out of Oregon, doing so just after Denver traded up to No. 35 to take running back Javonte Williams. The Dolphins did extensive work on Williams, but after the Broncos’ move, the team’s focus shifted. Holland will be ticketed to play a key role in Miami’s secondary as a rookie.

The Dolphins cut longtime starter Bobby McCain this offseason, clearing a path for Holland to move into the starting lineup as a rookie. Miami has converted cornerback Eric Rowe in position as a safety starter. Rowe has been a full-time safety first-stringer in each of Brian Flores‘ two seasons.

Holland opted out last year, joining Oregon first-round talent Penei Sewell in doing so, but the 6-foot, 207-pound defender packed plenty into his two-year Ducks sample. Holland intercepted nine passes in his two years with the Ducks. He added 4.5 tackles for loss as a sophomore in 2019.

A second high-profile Oregon Duck will not play this season. Despite the Pac-12 agreeing to play an abbreviated season beginning in November, safety Jevon Holland announced he will opt out of his junior season (Twitter link).

Holland, who ranks 20th on Todd McShay’s big board of draft-eligible 2021 prospects, joins acclaimed Oregon tackle Penei Sewell in opting out. Several high-end prospects have opted out of this COVID-19-altered season, and although some moved to return to their respective schools, others remain set to steer clear this unusual season and preparing for the ’21 draft.

Holland intercepted nine passes as a Ducks underclassman and ended his sophomore season as a first-team All-Pac-12 performer. He also worked as Oregon’s primary punt returner last season. ESPN’s Mel Kiper Jr. ranks Holland as his No. 16 overall prospect for 2021.