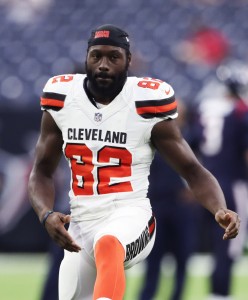 The Browns waived Williams shortly after the draft despite signing him to a reserve/futures contract in January. He’ll make his way to the Colts, who’ve been interested in the former UDFA for a bit now.

Indianapolis placed a waiver claim on Williams following a strong showing during the 2017 preseason, but Cleveland held higher waiver priority and won his rights after Seattle waived him. Now, the fourth-year wideout will attempt to make the Colts’ 53-man roster.

The Browns waived Williams last season but retained him for their practice squad. The University of Washington product caught nine passes for 84 yards in 2017. A 2015 49ers fourth-round pick out of Georgia Tech, Smelter has only seen action in two NFL games — both during the 2016 season. Smelter tore an ACL during his final season with the Yellowjackets and missed his rookie year. He finished 2016 on IR and despite not playing last season wound up with the Colts on a futures deal.

The Browns are releasing wide receiver Kasen Williams in order to make room for Corey Coleman on the active roster (Twitter link via Tony Grossi of ESPN.com). Williams will be subject to waivers, meaning that the league’s 31 other teams will have a chance to add him in the next 24 hours. 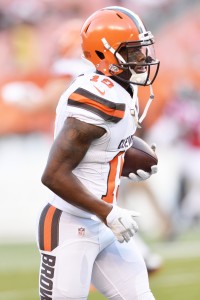 Williams, 25 in December, appeared in just three games for the Seahawks between 2015 and 2016. However, he broke out during the preseason with nine catches, 208 yards and one touchdown. That performance caught the attention of executives around the league and the Browns pounced on the chance to claim him off waivers when he missed the Week 1 cut in September. Now that he’s back on the wire, it wouldn’t be surprising to see multiple teams put in claims on him.

Waiver wire priority, of course, goes by the inverse order of the NFL standings. The Browns are the league’s worst team at 0-9, so the 1-9 49ers will have the first chance to add him to the roster. The 6-3 Seahawks may also have some interest in a reunion, but most teams are ahead of them in the queue.

In his time with Cleveland, Williams appeared in seven games and pulled down nine grabs for 84 yards.

The Colts placed a waiver claim on wide receiver Kasen Williams after he was cut by the Seahawks on Saturday, but the Browns held waiver priority and landed the preseason standout, according to Field Yates of ESPN.com (Twitter link). Ultimately, Indianapolis ended up keeping six wideouts: T.Y. Hilton, Donte Moncrief, Kamar Aiken, Chester Rogers, Matt Hazel, and Quan Bray. A Williams addition likely would have led to the release of either Hazel or Bray. The Colts, of course, also traded away a wideout over the weekend, shipping former first-rounder Phillip Dorsett to the Patriots in exchange for quarterback Jacoby Brissett.