Colts center Deyshawn Bond, who left Sunday night’s game on the second play, has suffered a torn quad, according to a source who spoke with ESPN.com’s Mike Wells (Twitter link). It’s too early to have an exact timetable on Bond’s return, but a torn quad will likely rule him out for the season. 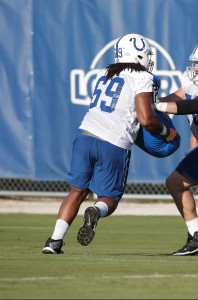 Bond ascended to the starting center job when Ryan Kelly broke his foot late in training camp. His injury is unfortunate, but the good news is that Kelly started practicing last week and the team is hoping that he’ll be back in action before long. With some luck, he may be able to go next Sunday against the 49ers.

“I mean, the last time that I actually really got down in a stance like that and hit somebody was against Detroit, so it’s been seven, eight weeks or so. But I think it’s kind of like riding a bicycle, so once you’re a couple practices in or so you start getting used to it,” Kelly recently said of his recovery (link via team website). “But I think just conditioning-wise and getting back into football shape, it’s amazing how fast you can get out of it. So that will certainly come with time. But (I’m) working every day just to stay in shape and get stronger, so looking forward to it.”

In three games this year (excluding this Week 4 contest against Seattle), Bond was on the field for 104 passing snaps and 85 run snaps, per Pro Football Focus’ data. He earned a poor 42.2 score from PFF in that limited sample, but Kelly liked what he saw from his understudy.

“He’s played really well — a real strong guy,” said Kelly. “It’s awesome we got him out of (college) free agency, and to see how hard he’s worked every single day to come in and prepare, and he’s been a real pro. Every day he’s gotten better, and it’s awesome to see.”