Mike Person is calling it a career. Following his offseason release from the 49ers, the longtime NFL guard announced his retirement. 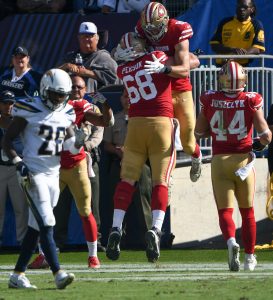 “I just feel like now is the right time,” Person told Greg Rachac of 406 MT Sports. “Obviously I wish it would have ended differently, especially this past season. You take a beating, and anybody who’s played knows that. At some point you just have to tell yourself now is the right time. My kids are getting older and most likely I’d spend the entire season away from them if I were to sign with someone. I’ve missed too much already.”

Person, 32, spent the last two seasons as the Niners’ starting right guard. Last year, they kept him from free agency with a three-year, $9MM pact including $3MM in guarantees. Few could argue with the value – in 2018, Person graded out as Pro Football Focus’ No. 18 ranked guard in the NFL out of 71 qualified players.

Before SF, Person suited up for the Seahawks, Rams, Falcons, and Colts. All in all, he spent nine years in professional football and played in six of those seasons. Along the way, he earned millions and played in a Super Bowl – not bad for a seventh-round pick.

Person was hoping that his knees and elbows would be less bothersome after taking some time to recover in the offseason. Ultimately, he decided to hang ’em up, but he admits that it wasn’t an easy decision.

“It was in the back of my mind. I knew once this contract played out, if it had, that I would retire,” he said. “It’s one of those things where 75% of you wants to be done with it but there’s that 25% that knows you can still do it and still play.”

The 49ers are moving on from Michael Person. The starting guard will be released on Thursday, as Adam Schefter of ESPN.com tweets.

Person, 32 in June, has spent the last two years with the Niners. Last year, they kept him from free agency with a three-year, $9MM pact including $3MM in guarantees. It was a low-cost deal with little in the way of locked-down money, so it wasn’t tough for SF to shed him.

At the time of the deal, it looked like a major win for the 49ers. As the 49ers’ starting right guard in 2018, Person graded out as Pro Football Focus’ No. 18 ranked guard in the NFL out of 71 qualified players.

This year, he started in all 14 of his regular season contests at multiple offensive line spots. Despite his experience and versatility, the 49ers have opted against keeping him as they’re tight against the cap.

The 49ers have locked up pending free agent offensive lineman Mike Person to a three-year deal worth $9MM, according to Adam Schefter of ESPN.com (Twitter link). The pact comes with $3MM in guarantees.

Person is entering his age-31 campaign and has been in the NFL since 2011, but last season marked only his second campaign as a full-time starter. The former seventh-round pick played 999 offensive snaps for the 49ers while spending all his time at right guard. Pro Football Focus, notably, ranked Person as the NFL’s No. 18 guard among 71 qualifiers.

Person — who has also had stints with the Seahawks, Rams, Falcons, and Colts — will be penciled in as San Francisco’s right guard again in 2019. However, his lack of track record and his low average annual salary means Person probably isn’t locked into a starting spot, especially if the 49ers bring in additional guards via free agency or the draft.

Matt Barrows of The Athletic believes the 49ers would jump at the chance to trade for Odell Beckham Jr. if the Giants actually make him available, but Barrows is more skeptical about San Francisco’s interest in Antonio Brown. It has been rumored that Brown’s preferred destination is the 49ers, but Barrows says San Francisco would only be a serious suitor for Brown if the Steelers’ trade demands are modest. Of course, we recently heard that Pittsburgh may not get more than a third-round pick for AB, so maybe that is modest enough for the Niners to take the plunge.

Now for more from around the NFL (and XFL):