Mark Nzeocha To Re-Sign With 49ers

It sounds like Mark Nzeocha is heading back to San Francisco. Matt Maiocco of NBC Sports Bay Area reports (via Twitter) that the linebacker intends to re-sign with the 49ers. 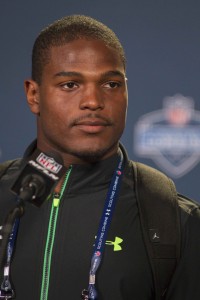 The 29-year-old spent that past two seasons with the Niners, appearing in 26 games between two seasons. The former seventh-rounder appeared in 16 games (three starts) last season, compiling 22 tackles, one sack, one pass defended, and one forced fumble. Nzeocha also led the 49ers with seven special-teams tackle. The linebacker didn’t play enough snaps to earn a spot on Pro Football Focus‘ positional rankings, but his pass-rushing ability received some praise.

Nzeocha will likely continue to have a special teams role in San Francisco, but he may occasionally see time at linebacker. He’ll have to compete with Dekoda Watson, Ryan Delaire, and free-agent addition David Mayo for backup reps.

We learned yesterday that Nzeocha met with the Bills.

With the first wave of NFL free agency largely in the books, teams have begun hosting lesser-known options that remain on the market: