The Lions have carved out a little extra cap room with help from Halapoulivaati Vaitai. On Tuesday, the Lions converted $1.335MM of the offensive lineman’s base salary into a signing bonus, giving them an additional $1MM in space for the rest of the year (Twitter link via Field Yates of ESPN.com).

The Lions aren’t playing for much at this point, but they may need a few bodies to close out the year. If the season ended today, the Lions (2-12-1) would hold the No. 2 overall pick in the draft, behind only the 2-13 Jaguars.

Vaitai joined the Lions in the 2020 offseason, scoring a shockingly large five-year, $50MM deal. While quality offensive linemen are hard to find on the open market, no one expected that kind of deal for a player who had started just four games over the previous two years.

So far, the former Eagle hasn’t done much to justify his deal. Last year, he was limited to just ten games and graded out as Pro Football Focus’ No. 51 ranked guard out of 80 qualified players. This year, it’s a similar story — he’s 49th out of 80. On the plus side, he’s been mostly healthy, starting in 14 games through 16 weeks.

The Lions will face the Seahawks on Sunday before wrapping the 2021 season against the Packers on Jan. 9.

A slightly more under the radar name is getting a huge payday. Former Eagles offensive tackle Halapoulivaati Vaitai is signing a massive five-year, $50MM contract with the Lions, a source told Adam Caplan of Sirius XM NFL Radio (Twitter link). 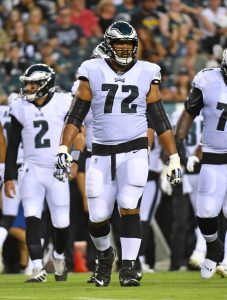 It’s a pretty remarkable sum considering Vaitai has only started four games over the past two years. It wasn’t totally unexpected though, as we heard a couple of weeks ago that he would likely command between $8-12MM annually. Vaitai has clearly always had talent, but he was buried on the depth chart due to the Eagles’ abundance of tackles. Philly has announced that Jason Peters will be allowed to hit free agency, and they’ll move forward with Andre Dillard and Lane Johnson as their tackles.

Vaitai was drafted in the fifth-round in 2016, and he ended up starting six games as a rookie. The following year he started ten games, winning Super Bowl LII with the team. As the Eagles got healthy at tackle he took a bit of a backseat, starting only once in 2018 and three times this past season.

The Lions released starting right tackle Ricky Wagner a few days ago, perhaps foreshadowing this move. The Lions are also letting starting right guard Graham Glasgow, who has received very strong marks from Pro Football Focus, walk in free agency, so their offensive line is going to look a lot different next year.

Matthew Stafford missed half of last season due to injury, so obviously protecting him will be a priority in 2020. The unit is getting an overhaul, and they’ll have to build chemistry in a hurry as a result. Vaitai is 26, and together with 26-year-old former first-rounder left tackle Taylor Decker, Detroit is surely hoping they’ve established a long-term tackle pairing.