The Saints have played their past two games without Pro Bowl cornerback Marshon Lattimore. They will play at least their next four without veteran starter Bradley Roby. 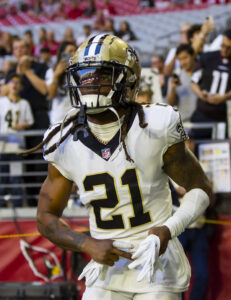 New Orleans placed Roby on IR on Tuesday, Field Yates of ESPN.com tweets. Roby suffered a foot injury in last week’s Saints-Cardinals game and needed to be carted off the field. Roby has been a Saints regular for the past two seasons, since New Orleans acquired him from Houston, and has started six games this year. The Saints re-signed wide receiver Keith Kirkwood to take Roby’s roster spot.

Roby, 30, re-signed with the Texans in 2020 but ended up being dealt to the Saints a year later. After playing 42% of New Orleans’ defensive snaps in 2021, he has be on the field for 78% of the team’s 2022 defensive plays. This will be a blow to a Saints team already dealing with trouble at corner.

An abdominal injury has sidelined Lattimore for the past two games; he remains on New Orleans’ active roster. The team has also played without rookie Alontae Taylor for much of this season and was without Paulson Adebo against Arizona. This left a skeleton crew, one including ex-Roby Broncos teammate Chris Harris, in the team’s Week 7 loss to the Cardinals. Roby’s injury obviously makes Lattimore and Adebo’s availability critical going forward, with the Cards’ win having dropped the Saints to 2-5 — their worst mark through seven games since 2005.

After making a name alongside Harris and Aqib Talib on Denver’s Super Bowl-winning defense, Roby has started 56 career games but has been a regular in all 120 he has played as a pro. The former first-round pick has allowed a 50% completion rate and limited quarterbacks to an 83.3 passer rating as the closest defender. Pro Football Focus, however, has the veteran boundary corner rated just inside the top 100 at the position this season.

The Saints are adding some reinforcement to their secondary. The team announced that cornerback Alontae Taylor has been activated from injured reserve. In preparation for tonight’s game, the team has also promoted cornerback Chris Harris Jr. and wide receiver Kevin White from the practice squad. Wideout Keith Kirkwood was cut from the active roster to make space. 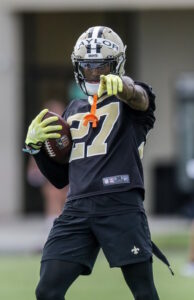 Taylor suffered a sprained MCL prior to Week 3, landing him on injured reserve. The rookie second-round pick ended up spending the minimum amount of time on IR before being designated to return earlier this week. The Tennessee product exclusively played on special teams during his NFL debut, but he got more run on defense in Week 2.

His return couldn’t come at a better time for a depleted Saints cornerbacks corps. Marshon Lattimore is sidelined and Paulson Adebo is questionable for tonight’s game, leaving the team thin at CB. The rookie probably won’t help relieve a secondary that’s allowing 189 yards per game to receivers, but he should at least provide some additional depth at the position.

Harris should also help in that regard, with the veteran cornerback now earning his third promotion since joining the Saints practice squad earlier this month. Harris got the start for the Saints in Week 6, finishing with eight tackles.

Michael Thomas and Jarvis Landry are both out for the Saints, leaving rookie Chris Olave as the team’s top wideout. White could get some reps at the position, with the former first-round pick having seen time in seven games for New Orleans over the past two seasons (albeit with only one catch). Kirkwood got into two games for the Saints this season, hauling in a pair of catches.