Not long after visiting the Falcons, offensive linemen Germain Ifedi has indeed joined the team. Atlanta announced on Wednesday that they have signed the veteran to a one-year contract. 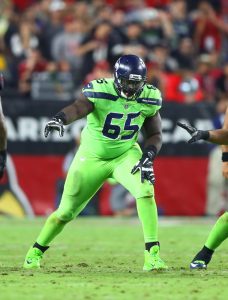 Ifedi met with the Falcons less than two weeks ago, so this move doesn’t come as much of a surprise. The 27-year-old was a first-round pick of the Seahawks in 2016. In four seasons there, he started all 60 games he appeared in. He manned both the right guard and right tackle spots, but never graded out well in terms of PFF ratings.

Ifedi then signed with the Bears two years ago. The first of his campaigns in the Windy City saw his best performance to date, as he played every snap and earned a PFF grade of 65. Availability became a problem for the first time in his career in 2021, however; a knee injury helped limit him to seven starts and nine games played. Just like in Seattle, Ifedi spent time at both guard and tackle.

By signing in Atlanta, the Texas A&M alum becomes the fifth ex-Bear to join the Falcons. The team’s starters at the RG and RT spots – Chris Lindstrom and Kaleb McGary, respectively – are each under contract for one more season. Ifedi could, at a minimum, provide experienced depth at each position for the 2022 campaign and perhaps earn himself an extended stay with his play there.

Germain Ifedi is still looking for his next home, and the veteran offensive lineman may have a chance to continue his career in Atlanta. According to ESPN’s Field Yates (via Twitter), the Falcons hosted the offensive lineman on a visit today.

Ifedi spent the past two seasons in Chicago, where he was originally recruited by former Bears GM (and current Falcons executive) Ryan Pace. The lineman started 23 of his 25 games during his time with the Bears, spending time at guard in 2020 before shifting to right tackle in 2021 following the release of Bobby Massie.

Ifedi missed a chunk of the 2021 season with a knee injury, and after starting the first two games following his return, he was demoted to special teams for Chicago’s final two contests.

The offensive lineman was a first-round pick by the Seahawks in 2016, and he ended up starting all 60 of his games during his four seasons with the team. His fifth-year option was ultimately declined, leading to him inking a one-year deal with Chicago in 2020.

The Bears will be without one of their offensive line starters going forward. They moved Germain Ifedi to IR, knocking the veteran blocker out for at least three games.

A knee injury sustained late in the first half Sunday sidelined Ifedi, moving Elijah Wilkinson into Chicago’s lineup. That arrangement will likely continue beginning Sunday. Ifedi is not expected to miss the rest of the season, per Matt Nagy. The Bears also placed outside linebacker Jeremiah Attaochu on IR. Attaochu suffered a torn pec, which will end his season.

Ifedi has started all 21 games he has played for the Bears. The former first-round pick came over after an underwhelming Seahawks tenure, but the Texas A&M product has proven dependable in Chicago. Ifedi slid to guard last season, but after the Bears released Bobby Massie this offseason, Ifedi moved back to the right tackle spot he played in Seattle. The Bears’ upcoming stretch — against the Packers, 49ers and Buccaneers — stands to test Ifedi’s replacement.

Wilkinson signed with the Bears this offseason but could not win the starting right tackle job out of camp. The Bears are already without their preferred left tackle, rookie Teven Jenkins, but the team does roster Jason Peters on the left side. Wilkinson did serve as a plug-and-play option in Denver, being the Broncos’ primary right tackle in 2019 and adding seven more starts to his resume in place of the oft-absent Ja’Wuan James last season.

It sounds like the Bears’ pursuit of Trent Williams will not result in a deal, but the club is bringing back one of its own offensive linemen. Per Ian Rapoport of NFL.com, Chicago is re-signing Germain Ifedi to a one-year deal worth up to $5MM (Twitter link). Adam Schefter of ESPN.com reports (via Twitter) that $4.25MM of that amount will be in the form of base salary.

This represents a nice raise for Ifedi, who signed a veteran salary benefit contract with the Bears last offseason. After serving as a guard during his rookie season in Seattle in 2016, the former first-round pick kicked out to right tackle for the 2017-19 seasons. Chicago moved him back into the interior of the line, and he performed reasonably well, grading out as Pro Football Focus’ 35th-best guard in the league (out of 80 qualifiers).

He also played better towards the end of the season, which certainly played a part in his pay bump. But after making a failed push for Williams and Russell Wilson, the Ifedi re-up is not likely to get the juices flowing for Bears fans.

The 26-year-old Texas A&M product will be blocking for Nick Foles, the newly-acquired Andy Dalton, or a rookie passer (or maybe all three).