Ja’Whaun Bentley is back in New England. The linebacker is on the verge of a brand new deal to remain with the Patriots (Twitter link via Field Yates and Mike Reiss of ESPN.com). 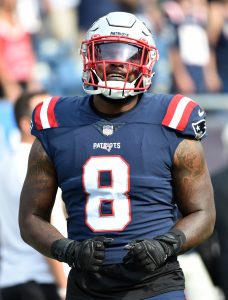 Bentley recorded 108 tackles last year to lead all Patriots defenders. There was little doubt that the Pats wanted him to return for 2022, but there was also concern that he had played his way out of town.

The 25-year-old had clearly outperformed his rookie deal, a paltry four-year, $2.8MM contract for his fifth-round slot. Meanwhile, the Patriots have cut Kyle Van Noy and they could potentially lose Dont’a Hightower and Jamie Collins to free agency.

Bentley will be joined by new faces in the LB group, including the recently acquired Mack Wilson. There should be plenty more moves on the way, too, regardless of how things shake out with the Pats’ veteran free agents.

The Patriots currently have a unique situation. The team is currently carrying just two running backs after they released Kenjon Barner to make room for Julian Edelman on the 53-man roster. The team cut Mike Gillislee and Brandon Bolden right before the season, and Jeremy Hill went down with a season ending knee injury early on. Then Rex Burkhead got placed on injured reserve with a neck injury, leaving them extremely thin in the backfield.

They’re down to only receiving specialist James White and rookie Sony Michel, and they will likely add outside help soon according to Mike Reiss of ESPN. Reiss writes “the team can’t expect to get by with just two running backs” and that it’s possible either Barner or Gillislee are brought back in the coming days. Undrafted rookie Ralph Webb is also on the team’s practice squad and could be called up.

The Patriots will place running back Rex Burkhead on injured reserve with a neck injury, according to Jim McBride of The Boston Globe (on Twitter). The Pats will also place rookie linebacker Ja’Whaun Bentley on IR with an unknown ailment. To fill Bentley’s place on the roster, the Pats have signed outside linebacker John Simon, Field Yates of ESPN.com tweets.

Burkhead, 28, had to be cleared from concussion protocol prior to the Patriots’ Week 3 game against the Lions. Unfortuantely, he was forced out of that game with a neck injury, putting the rest of his season in jeopardy. It’s currently unknown whether Burkhead is a candidate to return from IR later this year or if this is a definite season-ender.

In three games, Burkhead failed to get going on the ground with 24 rushes for 86 yards. Last year, he averaged 4.1 yards per carry in a limited sample.

Burkhead’s injury should mean a larger workload for rookie Sony Michel and more carries for James White. Kenjon Barner is back in the fold, so the club may opt to stand pat with those three active running backs plus fullback James Develin.

Bentley, meanwhile, is the just the latest Patriots 2018 draft pick to be placed on IR this season, joining first round tackle/guard Isaiah Wynn, second-round cornerback, sixth-round wide receiver Braxton Berrios, and others.