Bryan Mone will remain in Seattle for the next three years, and is set to receive a significant raise. The defensive tackle is signing a two-year, $12MM extension, per NFL Network’s Tom Pelissero (Twitter link). The deal includes a $1.5MM signing bonus, and can reach a maximum value of $13.8MM. 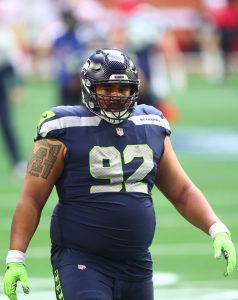 The 26-year-old has been with the Seahawks since 2019. He was cut from the 53-man roster in September during his rookie season, but immediately brought back on the team’s practice squad. He made just four appearances that season, but showed enough in his limited opportunities to remain in the fold for the following two years.

In 2020, the Michigan alum played 10 games, once again in a rotational role. He was tendered as an ERFA, keeping him in place for another year. This past season, he set a new personal high in snaps, and registered the first five starts of his career. He totalled 35 tackles and 1.5 sacks, making it an easy decision for the Seahawks to tender him once again this past April.

That decision locks in the former UDFA to a salary of $965K this season. This extension will keep him on the books through 2024, however, at a substantially higher rate. Seattle will be counting on his continued career ascension as he takes on a larger workload. It also represents the second straight year in which Seattle has signed an interior d-linemen to an extension before they played out the upcoming season on a tender, doing so in 2021 with Poona Ford.

Mone will remain in Seattle through its transition to a 3-4 base defense starting this year. As an appropriate scheme fit at nose tackle, he will look to take another step forward in production, knowing he is under contract for the intermediate future.