David Johnson should be back on the field tomorrow for the Texans. Aaron Wilson of the Houston Chronicle reports (via Twitter) that Houston is activating the veteran from injured reserve. The Texans are also promoting wideout Steven Mitchell from the practice squad. 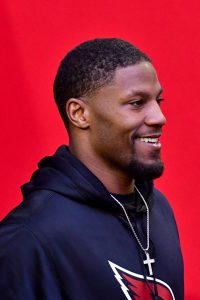 Johnson suffered a concussion during his team’s Week 9 win over the Jaguars, landing him on injured reserve. Over the past three-plus games, the Texans have mostly leaned on pass-catching back Duke Johnson to lead their rushing attack, although C.J. Prosise started digging into those carries during Houston’s Thanksgiving-day win over the Lions.

Following a number of injury-filled campaigns, the Cardinals dealt Johnson to Houston this past offseason in the DeAndre Hopkins trade. While the 28-year-old has an All-Pro nod on his resume, he still hasn’t rebounded to the point of justifying the three-year, $39MM extension he signed with Arizona back in 2018.

In eight starts this season, Johnson has rushed for 408 yards and three touchdowns on 103 carries, good for only 4.0 yards per carry. Further, while Johnson used to be a force catching the ball (he had 80 receptions back in 2016), he’s only hauled in 16 catches for 161 yards and one score in 2020.

Mitchell, a former undrafted free agent out of USC, has spent most of his three-year career with the Texans organization. The 26-year-old has appeared in five career games (one start), hauling in two catches for 37 yards.