Mohamed Sanu‘s tenure in Miami has come to an end already. The Dolphins are releasing the veteran receiver, reports Tom Pelissero of NFL Network (Twitter link). 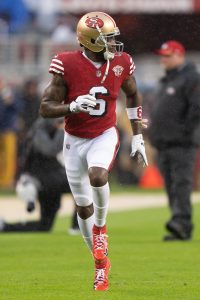 The 33-year-old signed with the team last month, looking to catch on as an experienced rotational player in the their new-look WR corps. The deal kept in line with his recent status as a journeyman; since being traded by the Falcons in 2019, Sanu has suited up for three different teams. He will need to add another name to that list, as he is back on the open market.

Sanu’s production has dropped off in recent years, though he has started 10 of the 26 games he appeared in since the end of his Falcons tenure. Nevertheless, he was destined for a backup job given Miami’s depth chart being topped by Tyreek Hill, Jaylen Waddle and Cedrick Wilson.

By releasing Sanu, the Dolphins are also paving a way to notable playing time for fourth-round rookie Erik Ezukanma. The team still faces some other interesting decisions at the position, however; the talent at the top of the roster – along with the presence of tight end Mike Gesicki – might leave room for only one more wideout to survive final roster cuts. As a result, names like Preston Williams and Lynn Bowden Jr. were reported as being shopped for whatever trade return the team could get.

Neither Williams nor Bowden could be considered locks given this news, so they could soon join Sanu in free agency as well. The latter will now look to catch on elsewhere, as teams navigate their own bubble players, as well as those let go of elsewhere during this period.

The Dolphins have already been in the headlines this offseason with their additions at the receiver position. The team is making another one today, signing veteran Mohamed Sanu, per his agent (on Twitter).

The former third-rounder has been well-travelled in recent years, a notable contrast to the early part of his career. In 2014 (the third of four years spent with the Bengals), he posted 790 yards – a total which remained his career high for several years. It wasn’t until his final full season in Atlanta that he upped that mark with a personal-best 66 receptions and 838 yards.

Since his midseason 2019 trade to the Patriots, however, Sanu’s production has dropped off. 2020 was also split between two teams (the 49ers and Lions); it was with the latter that he registered the most recent starts of his career. Despite releasing him the year before, San Francisco brought back the Rutgers product in 2021. Limited to eight games, he played nearly half of the team’s offensive snaps, but made just 15 catches. The 49ers have Jauan Jennings as their primary backup to Deebo Samuel and Brandon Aiyuk.

In Miami, Sanu will join a WR corps which already featured Jaylen Waddle and added Tyreek Hill and Cedrick Wilson this offseason. He will look to catch onto the backend of the roster as the Dolphins aim to take a dramatic step forward on offense. To make room for the signing, the team is releasing WR Cody Core with a non-football injury designation (Twitter link via CBS’ Jonathan Jones).

The 49ers have activated Mohamed Sanu from the injured reserve list, per a club announcement. With that, Sanu will be eligible to play in this weekend’s NFC Championship Game against the Rams.

The Niners haven’t seen Sanu since Week 9, when the veteran wide receiver suffered a knee injury. Before that, Sanu had just 15 catches for 177 yards across eight games. The 49ers have turned to Jauan Jennings ever since, using him as the WR3 behind Deebo Samuel and Brandon Aiyuk.

Sanu played in three games for the 49ers during the 2020 campaign, hauling in a single nine-yard catch. He was released in early October and ultimately caught on with the Lions before circling back to SF this year. At the age of 32, he’s not quite the player he once was, but he’s not that far removed from his career year in Atlanta. In 2018, Sanu finished with 66 receptions for 838 yards and four touchdowns.

If everything works out in practice, Sanu will have an opportunity to help the Niners’ cause. He could be joined by running back Trenton Cannon and safety Tavon Wilson, both of whom have been designated for return.

To make room on their 53-man roster for Sanu, the 49ers waived veteran safety Jarrod Wilson.

Mohamed Sanu is heading back to San Francisco. The veteran wide receiver is signing a one-year deal with the 49ers, agent Mike McCartney announced on Twitter.

Sanu played in three games for the 49ers during the 2020 campaign, hauling in a single nine-yard catch. He was released in early October and ultimately caught on with the Lions. After earning a promotion from the practice squad in late November, Sanu proceeded to appear in seven games (four starts) for Detroit, catching 16 passes for 178 yards and one score.

While the veteran will be 32 by the start of the 2021 campaign, he’s still only two years removed from a career year in Atlanta. During that 2018 season, Sanu finished with 66 receptions for 838 yards and four touchdowns. He was traded to the Patriots for a second-rounder during the 2019 season, but did little during his half-season stint in New England.

Following the 49ers blockbuster trade yesterday, it’s uncertain whether a rookie or Jimmy Garoppolo will be under center for the 49ers next season. Regardless, Sanu should provide the team with some nice depth at receiver behind 2020 first-rounder Brandon Aiyuk and 2019 second-rounder Deebo Samuel. Sanu will compete with the likes of Richie James Jr., Jalen Hurd, Jauan Jennings, and veteran Travis Benjamin for playing time.