Wilson, 31, has spent time with the Patriots, Lions, and Colts since entering the league in 2012. At his latest stop in Indy, the Illinois product suited up for 15 games including two starts. He’s best known for his time in Detroit, where he started in 39 of his 56 games across four seasons. Tartt, meanwhile, has started in all of his games since 2017, but he’s missed roughly half of all possible games due to injuries.

The Niners know that Wilson isn’t far removed from his best work. In 2019, he graded out as the No. 26 ranked safety in the leaggue, per Pro Football Focus,. That marked his best showing since 2016, his first go-round with the Lions.

As it stands, the Niners have Jimmie Ward, Wilson, Tarvarius Moore, and Marcell Harris in their safety unit. 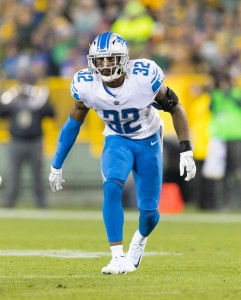 After Day 3 of the draft, the Dolphins added some safety depth and special teams help by picking up Kavon Frazier. But, before that, the Dolphins chatted with ex-Patriots safety Tavon Wilson about a minimum salary contract, Barry Jackson of the Miami Herald (on Twitter) hears. Wilson, who is presumably gunning for a better deal, declined.

With that, Frazier will fight for his place in the Dolphins’ sardine-packed safety group. Meanwhile, the 30-year-old Wilson will look for his next opportunity. Last year, Wilson made 13 starts for Detroit and registered 98 tackles, five passes defensed, two fumble recoveries, and one sack. Meanwhile, Pro Football Focus ranked him as the No. 26 safety in the entire NFL. Still, he hasn’t been able to score an offer to his liking and he hasn’t heard much, if anything, from the incumbent Lions.

Lions’ Tavon Wilson Would Be “Happy” To Return

Lions safety Tavon Wilson would be “happy coming back to Detroit” (Twitter link via ESPN.com’s Michael Rothstein). Still, he says he’s excited to going through the free agent process and survey his options.

Wilson, who will celebrate his 30th birthday on March 19, is coming off of one of the best seasons of his NFL career, so he’ll want to hear what other clubs have to offer him. In 2019, Wilson started in 13 games and notched 98 stops, five passes defensed, two fumbled recoveries, and one sack. The advanced metrics were also fond of his work. He graded out as the No. 26 ranked qualified safety in the NFL, per Pro Football Focus, with a 71.8 overall score. That figure was his best showing since 2016, his first campaign with the Lions.

As Rothstein notes, Wilson is a good fit for Matt Patricia‘s scheme, so the Lions would ideally like to hang on to him. Meanwhile, they’ve got other areas of need to address – with mystery surrounding Darius Slay‘s status, the Lions could embark on a cornerback search including players like longtime Broncos star Chris Harris or Cowboys CB Byron Jones.

On the other side of the ball, the Lions recently re-upped veteran receiver Danny Amendola.