49ers right tackle Mike McGlinchey will miss the rest of the year with a torn quad (Twitter link via Adam Schefter of ESPN.com). The Niners will place him on injured reserve today, freeing up a spot on their 53-man roster. 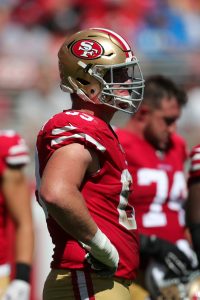 McGlinchey has been here before, missing a good chuck of the 2019 slate with knee trouble. He rebounded in 2020, however, starting in all 16 of the Niners’ games. Now, he’s going to spend the rest of 2021 focusing on rehab.

This was the feared outcome after McGlinchey was forced out in the second quarter against the Cardinals. The Niners turned to Tom Compton after that and he projects to stay in that starting role. However, McGlinchey’s injury could also lead to a larger role for rookie Jaylon Moore.

McGlinchey, a 2018 first-rounder, has spent his entire pro career with the 49ers. After an impressive and healthy career at Notre Dame, he’s since started in all 52 of his games as a pro.

The 49ers, down yet another key player, will face the Rams one week from today.