As teams trim down to 85 players, it’s mostly been smaller-name UDFA types getting let go so far. But some relatively well known veterans are also getting the boot, including James Burgess. 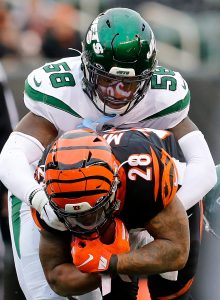 The 49ers announced they were cutting the linebacker on Monday. Burgess signed with the team back in May, but the addition over the weekend of fellow inside linebacker Mychal Kendricks made him expendable. A 2016 UDFA from Louisville, Burgess became a nine-game starter for the Browns in 2017.

He eventually latched on with the Jets as a waiver claim, and started 10 games in New York in 2019. Let go again at final cuts in 2020, he spent some time on the Falcons’ practice squad and played in a few games with the Packers. Despite having already been on the roster for nine different NFL teams, Burgess is still only 27.

He’s always managed to resurface quickly in the past, so don’t be surprised if he does again this season.

The 49ers are set to sign James Burgess (Twitter link via ESPN.com’s Adam Schefter). It’ll be a one-year deal for the former Packers and Jets linebacker.

Burgess went undrafted out of Louisville in 2016 and didn’t see the field until 2017 with the Browns. But, when he arrived in Cleveland, he notched four sacks and wound up starting nine of his 14 games. He later moved on to the Jets, serving as their starting middle linebacker for ten games in 2019. That year, he notched 80 total tackles, one interception, three passes defensed, and eight tackles for loss.

His 2020 with the Packers was a little less noteworthy — he saw just four games before losing the year to a hamstring injury. Now, he’ll get a shot to stick with the Niners, who are also taking a look at ex-Broncos linebacker Brandon Marshall. Marshall, 32 in September, was a key player for Denver’s 2015 Super Bowl squad, but he’s been slowed by injuries of his own in recent years. It’s not immediately clear whether Marshall is still in the mix for SF after the addition of Burgess.