Aaron Lynch has changed his mind on retirement. He has committed to resuming his career and is back on the Jaguars’ 53-man roster, per Field Yates of ESPN.com (on Twitter).

The former 49ers and Bears edge rusher signed with the Jags in May but opted to retire in August, doing so as the Jags lost a few defensive linemen — including Rodney Gunter and Al Woods. A six-year veteran, Lynch will provide some experience to a defensive front relying on recent first-rounders Josh Allen and K’Lavon Chaisson. Allen missed last week’s game with an injury.

Jacksonville also lost Jabaal Sheard this week, opting to let the veteran edge rusher head to New York rather than promote him to its active roster. The Jags also have the bulk of their practice squad on the reserve/COVID-19 list, so depth is somewhat of a critical issue this week. Of course, Lynch would need to navigate the NFL’s new near-week-long bevy of coronavirus tests before returning to practice.

In four 49ers seasons and two with the Bears, Lynch has 20 career sacks and 36 tackles for loss.

Jaguars defensive end Aaron Lynch will retire from the NFL, per a club announcement. Lynch, 27, leaves the Jaguars with yet another hole to fill in the front seven.

On Monday, fellow Jaguars DE Rodney Gunter arrived at the same decision. Previous to that, defensive tackle Al Woods opted out of the 2020 season, pushing his three-year, $18MM deal into 2021. All three of those players were new arrivals in Jacksonville, and none of them will be playing this year. Woods and Gunter were supposed to help fill in for Marcell Dareus and Calais Campbell. Lynch, meanwhile, was set to serve as a rotational edge rusher.

Lynch entered the league in 2014 as a fifth-round pick of the 49ers. He spent his first four seasons in SF and made a dent early with 12.5 sacks through his first two pro campaigns. Suspensions and injuries limited him to only 14 games between 2016 and 2017, and he moved on to the Bears in 2018. All together, he leaves the sport with 20 career sacks.

Aaron Lynch is heading to Florida. The Jaguars announced that they’ve signed the defensive end/linebacker. It’s a one-year deal, per NFL.com’s Ian Rapoport (on Twitter).

The 2014 fifth-round pick spent the first four seasons of his career with the 49ers, and he compiled 12.5 sacks through his first two seasons in the NFL. Suspensions and injuries limited him to only 14 games between 2016 and 2017, and he moved on to Chicago in 2018.

The veteran has spent the past two seasons with the Bears, collecting 22 tackles and five sacks in 29 games (three starts).

Lynch will provide the Jaguars with a rotational pass-rusher, and he could be in for a bigger role if the front office finds a taker for Yannick Ngakoue.

The Bears have re-signed Aaron Lynch, according to a team announcement. The outside linebacker will return on a new one-year deal.

Lynch met with the Seahawks, Raiders, and Colts this offseason, but he ultimately chose to return to the Bears for at least one more season. Lynch registered three sacks in Chicago last year, giving him 18 across five NFL seasons. However, 12.5 of those sacks came in his first two years in the league.

Lynch spent the first four seasons of his career with the 49ers and signed with the Bears last season to reunite with then-Chicago DC Vic Fangio. After playing on roughly 16% of the 49ers’ defensive snaps over his last two years in SF, Lynch saw an uptick in playing time last year, appearing in roughly one-third of the Bears’ defensive snaps.

Lynch can line up at DE or OLB, so he figures to split his time between those spots in 2019.

Aaron Lynch has enjoyed a busy free agency, and his itinerary will now include a trip to Indianapolis. The veteran edge rusher will visit the Colts on Wednesday, Ian Rapoport of NFL.com tweets.

With the Bears last season, Lynch registered three sacks. He has 18 in five NFL seasons, 12.5 of those coming during his first two years. The 26-year-old edge defender has spent most of his career as a 3-4 outside linebacker, with a one-year stay in San Francisco’s 4-3 look in 2017, but that fit matters less and less with teams using nickel and dime sets more than base looks now. Matt Eberflus‘ defense is a 4-3 scheme.

The Colts have not made any notable front-seven additions this offseason. They reached an agreement to retain Margus Hunt but have left their group alone for the time being. Ballard has added the likes of Jabaal Sheard and Denico Autry in free agency since taking Indianapolis’ GM reins. The Colts also have 2018 second-rounders Tyquan Lewis and Kemoko Turay in the fold, creating an interesting mix of linemen.

However, the team still probably has what can be considered a need for edge help.

Free agent edge defender Aaron Lynch suddenly finds himself with a busy schedule. After visiting with the Raiders today, the 26-year-old is headed to Seattle to visit with the Seahawks, per Ian Rapoport of NFL.com (via Twitter).

Lynch spent the first four seasons of his career with the 49ers and signed with the Bears last season to reunite with then-Chicago DC Vic Fangio. After playing on roughly 16% of the 49ers’ defensive snaps over his last two years in San Francisco, Lynch saw an uptick in playing time last year, appearing in roughly 1/3 of the Bears’ defensive snaps.

The former fifth-round pick offers some pass rush ability, and he did record 12.5 sacks across the 2014-15 seasons. Seattle was one of the better pass rushing teams in the league in 2018 in terms of raw sack totals, but Lynch, who can line up at either DE or OLB, would be a welcome addition to most clubs as a situational pass rusher if the price is right. 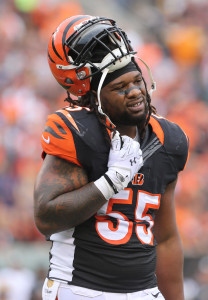 Tyrod Taylor gave Browns fans a scare on Thursday night when he left Cleveland’s preseason game with a hand injury, but he eventually return to the contest and was diagnosed with just a dislocated pinky, tweets Ian Rapoport of NFL.com. While undoubtedly a painful ailment, Taylor isn’t expected to miss any time with the issue, and he tweeted earlier today that he’s “doing well.” Taylor will begin the 2018 campaign as the Browns’ starting quarterback, but could eventually cede to No. 1 overall pick Baker Mayfield.