The Jaguars did not receive any offers for Yannick Ngakoue, GM Dave Caldwell says (via ESPN.com’s Mike DiRocco). With that, they’re planning to have him on the roster in 2020, though the defensive end won’t be happy about that. 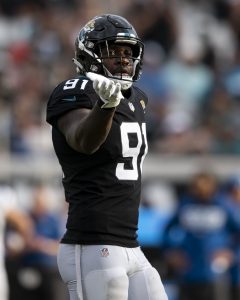 “I think his options are very limited at this point in time,” Caldwell said. “We’ll welcome him back with open arms when he’s ready to come back, and we look forward to it.”

The Jags discussed a deal with the Raiders earlier this week, but those talks didn’t go anywhere and they fizzled well before the draft started on Thursday night. Also this week, Ngakoue and owner Tony Khan took their battle to Twitter. The two traded barbs as Ngakoue pushed the Jaguars to hurry up and trade him.

“He is a tremendous player, tremendous person,” Caldwell said. “He’s always been first class in everything he’s done here, in the locker room and through his time here, the first four years of his contract. Obviously, he feels like things have not gone the way he wanted. In some aspects, he may have a point. But we put our best foot forward not once but twice, and I hope he sees the light that Jacksonville is a good spot, and it could at the end of the day be his only option.”

Ngakoue has yet to sign his non-exclusive tender for 2020, which would pay him $17.8MM. What he wants is a deal that would be worth roughly $20MM per season – but he doesn’t want it in Jacksonville.

15 comments on “Jaguars Received No Offers For Yannick Ngakoue”