The Bills have signed defensive back Akeem King, per a club announcement. King will help bolster the team’s cornerback depth following E.J. Gaines‘ decision to opt out of the 2020 season.

King has spent the last two seasons with the Seahawks. Last year, he suited up in 13 games, including three starts, plus a fair amount of time on special teams. With good size and bulk for the cornerback position, King could be called upon to guard larger tight ends. If he makes the roster – and it seems likely that he will, given the loss of Gaines – he’ll slot somewhere alongside Tre’Davious White, Josh Norman, Taron Johnson, and Levi Wallace on the CB depth chart.

In addition to King, the Bills have also signed defensive tackle Niles Scott. Scott suited up in six games for the Bengals in 2018 but was off the field last year due to a foot injury.

The Bills are looking to add to their secondary. They hosted former Seahawks defender Akeem King on a visit late this week, Tom Pelissero of NFL.com tweets. 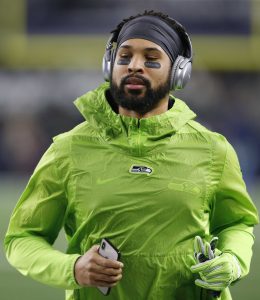 Under the current COVID-19-altered setup, teams are not permitted to host a free agent they are not giving serious consideration to signing. So the Bills appear to be prepared, depending on the results of King’s physical, to add a veteran to their secondary.

A 2015 seventh-round Falcons pick, King played 29 games for the Seahawks over the past two seasons. He started four of those but mostly served as a depth piece and a special-teamer. The 27-year-old DB did, however, play 25% of Seattle’s defensive snaps in 2019. King saw more time at safety last year. Pro Football Focus graded the San Jose State as a lower-middle-class player at that position in 2019, though King did not play enough snaps to qualify for full-time status.

Buffalo has one of the NFL’s best safety tandems, in Micah Hyde and Jordan Poyer. King also has cornerback experience. The Bills signed Josh Norman this year to potentially operate as their other boundary starter opposite Tre’Davious White. They also added E.J. Gaines to that group, which includes younger players Taron Johnson, Levi Wallace and Siran Neal.