The move comes shortly after Seattle cut safety Tedric Thompson to save a little bit of cash as well. Rapoport notes that Dickson had been set to earn $3MM in 2020, and that the Seahawks will save “most of it” by cutting him. Dickson had a very disappointing run in Seattle after signing a three-year, $10.7MM deal there in 2018. He missed the first six games of that season on the NFI list, and then missed all of last year with a knee injury.

Oddly, he started the year on injured reserve, was activated in November, but then nearly immediately placed back on IR without playing a game after he failed to recover from his knee injury. The circumstances of the knee issue were always a mystery, and it’s unclear if he’s now fully healthy.

A third-round pick of the Ravens back in 2010, Dickson has always been more of a blocker than a pass-catcher. He has had some reasonably productive years though, catching 30 passes for 437 yards with the Panthers in 2017, his last healthy campaign. Set to turn 33 in July, he’ll likely struggle for much guaranteed money assuming he wants to keep playing.

After having just activated him from injured reserve on Wednesday, the Seahawks are expected to place tight end Ed Dickson back on IR, according to Jeremy Fowler of ESPN.com (Twitter link). Seattle reportedly has concern about Dickson’s recovery from an ongoing knee issue.

Dickson was originally slated to miss four-to-five weeks after undergoing knee surgery in early August, but he never came close to meeting that recovery timeline. The Seahawks have already placed Will Dissly on injured reserve and traded Nick Vannett, so Dickson could have seen immediate work alongside fellow tight end Jacob Hollister had he been able to stay on the field.

If the Seahawks want to move on from Dickson next spring after essentially two lost campaigns, they could cut the 32-year-old without much financial consequence. Seattle would save $3.4MM in cap space and incur only $866K in dead money by releasing Dickson.

Jason Pierre-Paul restructured his contract with the Buccaneers yesterday, and now we have the details. Originally scheduled to make $13.65MM in 2019, his new base salary will be just $3MM, according to Greg Auman of The Athletic. He’s eligible to come off the NFI list and return for the final ten games of the season, and he’ll receive a $200K bonus for each of those games that he plays in. He’ll get an additional $200K for every game he plays at least 50 percent of the defensive snaps and another $200K for each game he plays 75 percent of the defensive snaps. If he’s able to hit eight sacks he’ll get a $500K bonus and another $1MM if he reaches ten sacks, pushing the maximum value to $10.5MM.

Those sack goals are pretty lofty for only ten games, and it’s unlikely he makes the max value. Because JPP suffered a non-football injury, the Buccaneers weren’t obligated to pay his 2019 salary at all and could’ve voided his guarantees. But as Auman writes, “the team wouldn’t look good not paying a player whose injury came in a car accident in which he wasn’t even cited,” so the two sides came to an agreement. It’s unclear if he’ll actually be ready to go in Week 8 after the Bucs’ bye, as we haven’t gotten an update on his neck in a while.

Given Dickson’s recovery timeline, he’s likely to miss at least one regular season game, but complications could potentially extend that timeframe. Starting tight end Nick Vannett will continue to see the bulk of Seattle’s tight end load, but 2018 fourth-round pick Will Dissly — who posted eight receptions and two touchdowns in four games before going down with a patellar tendon injury during his rookie campaign — could see more time. Trade acquisition Jacob Hollister, whom Michael-Shawn Dugar of The Athletic reports has “been as impressive as anyone on the [Seahawks’] roster”, might also be in line for extra work.

Ed Dickson is in line to make his Seahawks debut on Sunday. The team activated its free agent addition from the reserve/NFI list on Saturday. 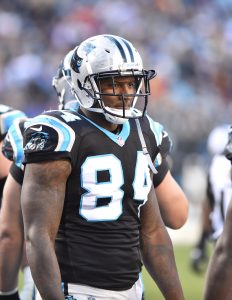 The veteran tight end missed all of training camp because of injuries, though Pete Carroll said the soft-tissue maladies not being too serious allowed Dickson to ramp up work in advance of what looks like a Week 8 debut. He returned to practice this week.

Signing a three-year, $10.7MM contract with the Seahawks in advance of his age-31 season, Dickson will help a Seattle team that lost Jimmy Graham in free agency. Will Dissly is on IR, and Nick Vannett leads all active-roster Seattle tight ends with 110 receiving yards. Vannett’s also battled injury trouble this season.

Dickson started 12 games for the Panthers last season, filling in for much of the slate as Greg Olsen‘s injury replacement. He caught 30 passes for 437 yards last season. That total represents the second-best of Dickson’s career, making this activation a potentially critical depth aid for the 3-3 Seahawks.