The injuries keep on coming for a banged up 49ers team. San Francisco picked up a huge win over the Rams yesterday but cornerback Jamar Taylor tore his ACL in the process, Matt Barrows of The Athletic tweets. 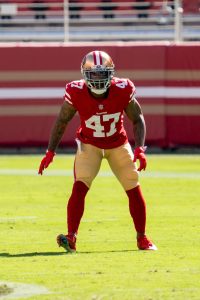 Obviously, he’ll miss the rest of the season. It’s an especially tough blow for Taylor since, as Barrows wrote in a piece just last week, he was having a strong season. Making it even tougher is the fact that Taylor is set to be a free agent at the end of the year, and this will surely negatively impact his market. If he avoided any other ligament damage he should be ready for the start of the 2021 campaign.

Taylor signed with the 49ers back in June, but was released right before the start of the season. He was soon added to the practice squad, and promoted to the active roster shortly thereafter. Due to injuries he quickly started getting real playing time, and has started three of their past seven games. He intercepted two passes during the 49ers’ win over the Patriots, his only two picks of the year.

A second-round pick of the Dolphins back in 2013, Taylor has bounced around a bit. He started 29 games for the Browns from 2016-17, but hasn’t been able to find a consistent home since. As Barrows wrote in his piece, the coaching staff is fond of Taylor, and all the team’s cornerbacks will be free agents this spring. Perhaps he’ll be brought back on a one-year prove-it deal. He turned 30 in September.

The 49ers are adding some veteran cornerback depth. They announced Monday they have agreed to terms with Jamar Taylor. In a corresponding move, the 49ers waived former second-round corner Teez Tabor with a non-football injury designation.

Also a former second-rounder, Taylor has played seven NFL seasons — two of which with NFC West franchises, the Cardinals and Seahawks — and has bounced around the league. The 49ers will be the ex-Dolphin draftee’s seventh team.

Taylor, 30 in September, played in 12 games in 2019 — nine for the Seahawks and three for the Falcons. His last starts came for the 2018 Cardinals, but he was a regular starter with the 2016-17 Browns. Last season, Taylor played 204 defensive snaps.

The 49ers did not address their cornerback position in the draft but did pick up slot man K’Waun Williams‘ option earlier this offseason. Their top four of Richard Sherman, Williams, Ahkello Witherspoon and Emmanuel Moseley remains. Taylor now stands to compete for a depth role when the 49ers convene for camp.

A former Lions draftee, Tabor received a second chance with the 49ers last season. San Francisco signed the ex-Florida DB in September 2019 and stashed him on its practice squad. Tabor, however, has been unable to impress as a pro and will venture to the waiver wire.

The Falcons are signing cornerback Jamar Taylor, as Mike Garafolo of NFL.com tweets. The veteran appeared in nine games with the Seahawks earlier this year before being released in late November.

Taylor had three passes defensed with the Seahawks, who dropped him twice in 2019 – once in August and again in November. All in all, he’s been a part-timer in his seventh pro season, notching 20 tackles in nine games as a backup.

The Falcons’ season is effectively over, but Taylor will get a chance to showcase himself before free agency begins in March. Still only 29, the former second-round pick could put himself in line for a deal with a cornerback-needy team.

With three games to go, the Falcons are 4-9 and in line for the No. 8 overall pick.