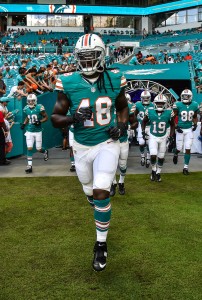 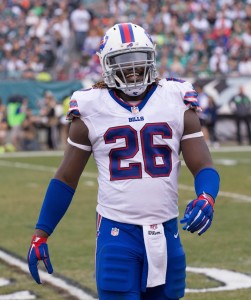 After working out a handful of running backs today, the Bills have signed veteran free agent Boom Herron, the team announced in a press release. Trent Richardson and Alfonso Smith were among the other backs that auditioned for Buffalo.

Herron, who suffered a sprained AC joint in the Colts’ final preseason game, was waived by the team in September. The 26-year-old had been competing for a role as one of Frank Gore‘s backups after spending the last two years with Indianapolis. Herron played in all 16 of the Colts’ regular-season contests in 2014 and rushed for 351 yards and a touchdown, adding 21 catches.

Prior to the signing of Herron, Boobie Dixon and Cierre Wood, who was recently promoted from the team’s practice squad, were the only healthy backs on the Bills’ 53-man roster. Starter LeSean McCoy is dealing with a hamstring injury and is expected to be sidelined for at least one more week, while rookie Karlos Williams suffered a concussion in Sunday’s loss to the Giants.

In order to make room on the roster for Herron, the Bills placed tight end MarQueis Gray on injured reserve. Gray sustained a fractured forearm on Sunday, which will end his season.

Earlier today, we identified several notable players returning from four-game suspensions who could be active for their respective teams in Week 5. One player we didn’t mention? Bills edge defender IK Enemkpali, who may qualify more as “notorious” than “notable.”

Enemkpali, who was picked up by the Bills after the Jets cut him for punching Geno Smith, was briefly moved to Buffalo’s 53-man roster so that the team could store him on its reserve/suspended list while he served his four-game ban. Now that he’s eligible to return, it’ll be interesting to see whether the Bills put him on the 53-man roster or cut him and try to get him back on their practice squad, as Mike Rodak of ESPN.com details.

For now, the Bills will have a roster exemption for Enemkpali, and won’t have to make an immediate decision. As the team decides what to do with the young defensive end, let’s check in on some other Bills-related items….

We’ll keep tabs on Thursday’s minor transactions, including practice squad signings and cuts, in this post, with the latest updates added to the top of the list throughout the day:

3:10pm: A day after receiving word that starting running back Adrian Peterson has been suspended the rest of the 2014 season, the Vikings have added another back to their roster, according to Field Yates of ESPN.com, who reports (via Twitter) that Minnesota has claimed Ben Tate off waivers from the Browns.

Tate, 26, signed with the Browns in the offseason in the hopes of taking over as the team’s No. 1 back, but was surpassed on the depth chart by rookie Isaiah Crowell and Terrance West. In eight games for Cleveland this season, Tate carried the ball for just 333 yards on 106 attempts, a 3.1 yards per carry average. After griping publicly about his lack of playing time and losing nine yards on two carries on Sunday, Tate was cut by the Browns on Tuesday.

Without Peterson for the majority of the season, the Vikings have relied primarily on Jerick McKinnon and Matt Asiata as their ball-carriers, but both players missed practice today with injuries, as Ben Goessling of ESPN.com notes (via Twitter). Given the banged-up state of their backfield, and the fact that Peterson almost certainly won’t see the field this season, it makes sense that the Vikings could use some depth at the running back position.

There had been speculation that the Colts, who saw Ahmad Bradshaw go down with a season-ending ankle injury on Sunday night, may submit a claim for Tate, but Indianapolis would’ve been behind Minnesota in waiver priority — the order is determined by record, with the league’s worst teams getting the first crack at players who have been released.

By claiming Tate rather than signing him as a free agent, the Vikings will assume the contract that the ex-Texan signed with the Browns back in March. That means that if Tate’s stint in Minnesota during the final six weeks of this season is a success, the team would have the option of keeping him on the roster next season for a base salary of $2.2MM.