The 49ers have agreed to sign tight end Erik Swoope, as Ian Rapoport of NFL.com tweets. Swoope spent the 2019 season away from football after being dropped by the Raiders last summer.

Swoope, a former basketball standout at the University of Miami, had a noteworthy year with the Colts in 2016. Thanks in part to injury, the 28-year-old has yet to see similar playing time since then or match his average of 19.8 yards per reception (across a limited sample of 15 catches). Injuries have been partly to blame, including a 2017 season that was wiped out by knee surgery.

The 49ers already boast the scariest TE duo in the league in George Kittle and Jordan Reed. Still, Reed has been limited throughout camp and reinforcements wouldn’t be a bad idea given his troubling history with concussions.

In other Niners news, the club has been connected with free agent safety Earl Thomas. There might not be as much competition for the Pro Bowler as expected – the Falcons, Texans, and other possible fits have decided to pass.

Erik Swoope has made his decision. The free agent tight end has signed a one-year deal with the Raiders, reports ESPN’s Adam Schefter (via Twitter). We learned earlier today that Swoope had auditioned for the Raiders, Redskins, and Buccaneers. 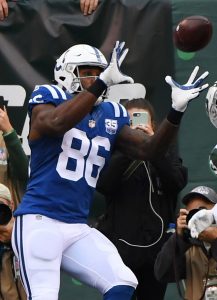 Following a standout basketball career at Miami (FL), Swoope switched his focus to football following his senior season. The six-foot-five, 257-pound tight end ultimately joined the Colts as an undrafted free agent, and he proceeded to spend the next five seasons with the organization.

Swoope barely saw the field during his first two seasons in the NFL, but he eventually appeared in a career-high 16 games in 2016. The 27-year-old missed the 2017 campaign after undergoing knee surgery, but he returned and appeared in seven games (two starts) this past season. Swoope finished the campaign having hauled in eight receptions for 87 yards and three touchdowns.

The Raiders moved on from Lee Smith earlier this month, opening a spot on their tight ends depth chart. Free-agent addition Luke Willson is expected to be the team’s starter, but Swoope will have a chance to compete with Derek Carrier and rookie Foster Moreau for backup snaps.

Former Colts and Saints tight end Erik Swoope will work out for the Raiders on Tuesday, a source tells NFL.com’s Ian Rapoport (on Twitter). Swoope also worked out for the Redskins and Buccaneers in the past few days and Rapoport expects him to sign somewhere soon.

Swoope originally signed with the Colts as an undrafted free agent in March of 2014. He made his first real impact in 2016, when he caught 15 passes for 197 yards and one touchdown. After losing his 2017 season to a knee issue, he returned in 2018 to appear in seven games and catch eight passes for 87 yards and three scores. The Colts jockeyed him on and off the roster last year, so Swoope is probably hoping for more in the way of stability on his next deal.

The Colts signed tight end Erik Swoope to the practice squad, according to a team announcement. Swoope will serve as insurance in case tight end Eric Ebron is not cleared from concussion protocol before Sunday night’s pivotal game against the Titans.

Swoope originally signed with the Colts as an undrafted free agent in March of 2014. He made his first real impact in 2016, when he caught 15 passes for 197 yards and one touchdown. After losing his 2017 season to a knee issue, he returned this year to appear in seven games and catch eight passes for 87 yards and three scores.

The Colts dropped Swoope a few weeks ago, but he’s back to serve as a potential backstop for a crucial win-and-in contest. As of this writing, Mo Alie-Cox and Ryan Hewitt are the only other healthy tight ends on the active roster.

To make room for Swoope, the Colts dropped quarterback Phillip Walker from the practice squad.

After claiming tight end Erik Swoope off waivers on Wednesday, the Saints are releasing him, a source tells Ian Rapoport of NFL.com (on Twitter). Swoope spent less than 24 hours in New Orleans and he’ll now go straight back on the waiver wire.

The Saints’ juggling is perplexing, though it could be a sign of a larger move to come. The Saints have been hoping to get wide receiver Ted Ginn back on the field and, if he can’t go, offensive lineman Josh LeRibeus is also a candidate for return.

Help from LeRibeus, who appeared in all 16 games last season, would be nice, but Ginn would probably be more of a difference-maker. Last year, Ginn turned in one of his better offensive seasons with 53 catches for 787 yards and four scores. He can also aid in the return game, where he has thrived in the past.

Swoope, meanwhile, could easily wind up back with Indianpolis, where he is a beloved locker room presence.

The Saints have released wide receiver Brandon Marshall, a source tells Field Yates of ESPN.com (on Twitter). The move will create room for tight end Erik Swoope, who has been claimed off waivers from the Colts (Twitter link via Mike Florio of PFT). 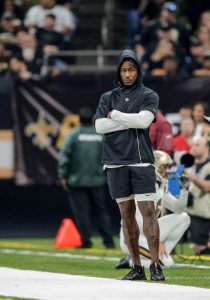 It was a short stay in New Orleans for Marshall, who was signed in November when Dez Bryant tore his Achilles just hours after inking his contract. Despite spending a full month with the team, Marshall never saw the field. Instead, he was used as a scout team receiver and was unable to leapfrog the team’s top five of Michael Thomas, Tre’Quan Smith, Austin Carr, Keith Kirkwood, and Tommylee Lewis.

The fact that Marshall could not crack the rotation in spite of injuries to Bryant, Cameron Meredith, and Ted Ginn Jr. probably doesn’t bode well for his NFL future. The transaction could also be a sign that Ginn still has a chance to return from IR this year, but there’s no word on that front just yet.

Marshall is a six-time Pro Bowler, but he hasn’t played at an elite level since the 2015 season in which he posted 109 receptions, 1,502 yards, and a league-leading 14 touchdowns for the Jets. Injuries have limited his effectiveness and overall production, and it’s fair to wonder if this will mark his last stop in the league.

Swoope, meanwhile, joins the club just hours after being discarded by the Colts. He was largely eclipsed by Eric Ebron and Jack Doyle this year, but he still managed three touchdown grabs in 2018. Swoope – for the moment – is one of four TEs on the roster along with Ben Watson, Josh Hill, and Dan Arnold.