Brian Quick is back with the Redskins, according to an announcement from his agent. The Redskins released Quick in November of last year, but they want to take another look at him for depth at wide receiver. 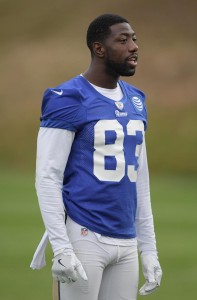 Currently, the Redskins are pretty thin at wideout and the status of Paul Richardson and Robert Davis is uncertain as they rebound from serious injuries. There are also ankle injuries to Cam Sims and Trey Quinn to consider, so Quick at least has a path to making the final cut. Then again, a whole lot will change between now and September, so nothing is guaranteed for the veteran.

Quick, 30 in June, spent the first five years of his career with the St. Louis/Los Angeles Rams. In 2017, he hooked on with the Redskins, but injuries prevented him from ascending the depth chart. With the Rams, Quick had some promising moments, including a 41/564/3 line in his 2016 platform year.

He wasn’t gone long. Wide receiver Brian Quick is re-signing with the Redskins according to Mike Garafolo of NFL Network (Twitter link).

The veteran wideout was released by Washington at final cuts. It appears to have been partially a procedural move to ensure that Quick, a vested veteran, wouldn’t have his full contract guaranteed at the Week 1 deadline. The team clearly had him number one on their list of players to call when an injury occurred. Two of the team’s reserve receivers suffered injuries in yesterday’s game. Quick’s contract will now only be partially guaranteed since he signed after Week 1.

Quick, who spent the first five years of his career with the Rams after being taken with the 33rd overall pick in 2012, appeared in 11 games for the Redskins last season. He caught just six passes for 76 yards. The year before that in 2016, he caught 41 balls for 564 yards and three touchdowns in Los Angeles.

The Redskins have a crowded receiving depth chart with Jamison Crowder, Josh Doctson, and Paul Richardson all firmly entrenched in their roles, so it’s unlikely Quick sees too much playing time.

The 2012 second-round pick had spent the first five years of his career with the Rams before signing with Washington last offseason. During his lone season with the Redskins, Quick hauled in six receptions for 76 yards in 11 games (one start). However, he isn’t far removed from his best NFL season in 2016, when he compiled 41 receptions for 564 yards and three touchdowns.

With Quick off the roster, Trey Quinn and Maurice Harris have likely solidified their roster spots behind Josh Doctson, Jamison Crowder, and Paul Richardson.

The Redskins have reached an agreement to bring back Brian Quick, according to his agency (via Adam Caplan of ESPN.com, on Twitter).

Last season marked Quick’s first in Washington, and he was not an often-used component of the Redskins’ passing game. Quick caught just six passes — 35 fewer than he had with the 2016 Rams — but he will return to the nation’s capital.

Washington agreed to terms with Paul Richardson on Tuesday and will bring back Jamison Crowder and Josh Doctson. While the Redskins lost Ryan Grant to the Ravens, Quick will likely remain a depth performer and special-teamer in what will be his seventh NFL season.

The NFL is reportedly wrapping up its investigation into Cowboys running back Ezekiel Elliott, but franchise owner Jerry Jones stood behind Elliott when addressing the media earlier today, according to Todd Archer of ESPN.com. “I have reviewed everything and there is absolutely nothing – not one thing – that had anything to do with domestic violence,” Jones said. Last week, Adam Schefter of ESPN.com reported a “growing sense” that Elliott will face a league-imposed suspension. Elliott was never arrested or charged in the incident, but his accuser addressed her allegations in a statement today.

Here’s more from Dallas and the rest of the NFC East: