There is a “growing sense” that Ezekiel Elliott could be hit with a short suspension in the coming weeks, ESPN.com’s Adam Schefter (video link) reports. The Cowboys running back is personally bracing for the possibility that he could miss the start of the 2017 regular season. 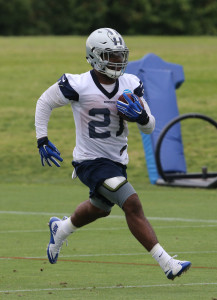 The Cowboys open the season against the rival Giants before facing the Broncos in Week 2. At this time, Schefter gets the feeling that Elliott will miss one, if not both of those games. Still, the NFL has yet to make a final determination on the matter and nothing will be decided until the investigation is wrapped up.

Last year, a woman accused Elliott of abusing her on two separate occasions in 2016. He was never arrested or charged for either supposed incident, but the NFL requires much less evidence to levy punishment than the American legal system. Given the league’s ugly history with domestic violence, they are not taking the accusations against the young star lightly.

Elliott, 22 later this month, ran for a league-leading 1,631 yards off of 322 carries last year with 15 touchdowns. He supplemented that incredible stat line with 32 catches for 363 yards and one score.