The Redskins are adding some offensive line depth. The team is signing offensive tackle Corey Robinson, according to John Keim of ESPN.com (Twitter link). 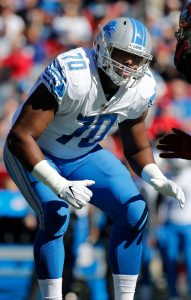 Trent Williams didn’t report to training camp and his status with the team is uncertain at best, so it makes sense why they made the move. It’s unclear if this will impact their interest in free agent tackle Donald Penn, who we heard yesterday they planned on working out. In a separate tweet, Keim writes that sources told him there’s “still a chance” the team signs Penn.

Robinson originally entered the league as a seventh-round pick of the Lions back in 2015. He spent the next three seasons with Detroit, and started eight games for them between 2016 and 2017. He got traded to the Panthers just before the start of last season, but was released a few weeks later. He was picked up by the Jaguars in November, and ended up starting a game for them.

The Redskins lost swing tackle Ty Nsekhe in free agency this offseason, which makes the Williams situation all the more unsettling for them. Williams is apparently seeking a new contract, and hopefully they can get him back in the fold soon. Ideally, Robinson won’t be seeing the field very much.

Landry Jones‘ short time in Jacksonville has come to an end. On Monday, the Jaguars released the quarterback, according to a team announcement.

The Jaguars signed Jones on Halloween for insurance after Blake Bortles suffered a left shoulder injury. Now that Bortles is in the clear, the Jaguars felt comfortable enough to release Jones, leaving Cody Kessler as the team’s only backup QB.

Up until the Jags deal, Jones spent his entire NFL career with the Steelers. In a limited sample of playing time, Jones completed 64% of his throws with eight touchdowns against seven interceptions. Among the quarterbacks who have thrown at least 160 passes since 2013, Jones ranks 35th in passer rating and 26th in adjusted net yards per attempt, but it’s difficult to assign much relevance to those numbers given his lack of reps.

To fill Jones’ place on the roster, the Jags signed offensive lineman Corey Robinson. The fourth-year pro has 24 career games to his credit, including eight starts.