The Jaguars are signing running back Elijah Hood, according to the team’s website. The franchise had planned on giving Alfred Blue a shot at the backup RB spot, though Blue suffered an ankle injury during the team’s second preseason game.

Hood was selected by Oakland in the seventh round of the 2018 draft. The Raiders cut him at the beginning of training camp last year and he caught on with the Panthers later in the summer. Hood tore his ACL during last year’s preseason and spent the season on injured reserve.

Jacksonville has released quarterback Tanner Lee to make room for Hood. Lee was a sixth-round pick in 2018 who mostly participated with the Jags’ practice squad. Rookie Gardner Minshew, who was selected in the sixth round this year, will man the QB spot behind Nick Foles.

The Panthers have re-signed running back Elijah Hood to a one-year deal, the club announced today. Wood had been scheduled to become an exclusive rights free agent this offseason, so he wouldn’t have had the option to leave Carolina unless the team opted to non-tender him. 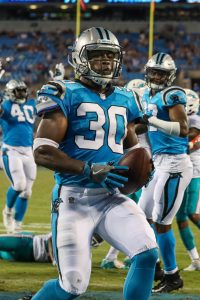 Hood, 22, entered the NFL as a seventh-round pick of the Raiders in 2017. While he didn’t make Oakland’s 53-man roster at the outset of his rookie campaign, Hood signed with the Raiders’ practice squad and was eventually promoted in for one week that October. After being waived the following May, Hood was claimed off waivers by the Panthers. However, he spent the entire 2018 season on injured reserve after tearing his ACL on a preseason kickoff return.

Carolina’s backfield was dominated by Christian McCaffrey — who played more than 90% of the club’s offensive snaps — last season, but Hood could compete for backup duty. Travaris Cadet, Kenjon Barner, Cameron Artis-Payne, and Fozzy Whittaker are all unrestricted free agents, leaving 2018 undrafted free agent Reggie Bonnafon as the only other Panthers back under contract alongside McCaffrey and Hood.