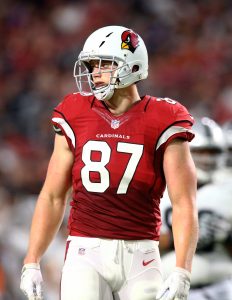 Troy Niklas‘ recent visit to New England will produce a contract. The Patriots are planning to sign the former Cardinals tight end, Ian Rapoport of NFL.com tweets, adding this is a one-year agreement.

Niklas will join a tight end corps that is expected to still house Rob Gronkowski, along with Dwayne Allen, but Gronk has yet to officially declare he will be back next season. Reports have indicated he will return, however.

A 2014 Cardinals second-round pick, Niklas has just 19 career receptions for 203 yards. Interestingly, Pro Football Focus was much fonder of his 2017 receiving skills than when he attempted to block during running plays, grading Niklas as the second-worst run-blocking tight end in football last season. PFF, though, viewed him as a much better run-blocking presence in previous years.

Niklas has battled injuries throughout his career, twice playing in seven or fewer games in a season. He suited up for 15 last year, however.

The Patriots’ acquisition of Allen did not pay immediate dividends, but there is now another option on the team — and one that likely will come at a low cost. 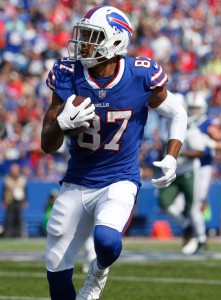 Matthews met with the Packers and Cardinals in March, but left both visits without signing a deal. This time last year, the 25-year-old (26 in July) projected to be a high-end commodity in this year’s free agent market. Unfortunately, he had only 25 catches in ten games for the Bills last year thanks to knee and ankle injuries, so he’s probably looking at a one-year deal to restore his value.

From 2014-16, Matthews averaged 75 receptions for 891 yards and six touchdowns for the Eagles. He says he’s healthy now, so he could prove to be a valuable pickup for the Pats as they look to replace Danny Amendola‘s production.

Niklas, 26 in September, saw time in 414 snaps for the Cardinals last year and served primarily as a blocker. He hasn’t exactly lived up to his second-round draft status, but the Patriots may see potential in the athletic Notre Dame product.