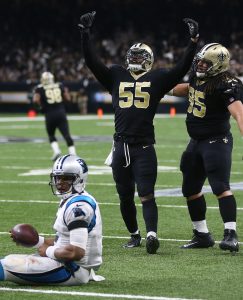 Freeny, 28, should offer immediate scheme familiarity for the Lions, as he worked under new Detroit head coach Matt Patricia when both were employed by the Patriots from 2015-16. The Lions have already added several free agent linebackers this offseason, as signees Devon Kennard and Christian Jones will join a depth chart that also includes 2017 first-rounder Jarrad Davis, Jalen Reeves-Maybin, Nick Bellore, and others.

Freeny saw action for the Patriots, Saints, and Ravens last season, and also enjoyed a brief non-playing stint on the Jaguars’ roster. While he’s become primarily a special-teamer, Freeny started seven games for New England as recently as 2015, so while he’ll likely begin his Lions tenure as a reserve, he has the upside to become a full-time fixture on the Detroit defense.

Before inking a deal with the Lions, Freeny also drew interest from New Orleans, which was open to re-signing the former undrafted free agent.

Free agent linebacker Jonathan Freeny will meet with the Lions on Friday, according to Herbie Teope of the Times-Picayune (on Twitter). Meanwhile, a return to the Saints could still be in the cards.

Freeny joined the Saints in December and worked his way into the linebacker rotation. He appeared in two regular season games as well as both of New Orleans’ playoff contests. In the postseason, he tallied five tackles and one sack (pictured).

In other Lions news, the team re-signed running back Zach Zenner on Friday and has a meeting scheduled with running back Mike Davis.

The Saints have claimed linebacker Jonathan Freeny off of waivers from the Patriots, Field Yates of ESPN.com tweets. To make room, cornerback Sterling Moore has been released.

The Patriots released Freeny on Wednesday as part of a series of roster moves that included the signing of Kenny Britt and defensive lineman Ricky Jean-Francois. His 2017 return to New England lasted only one week. Freeny will provide the Saints with some depth in their injury-ravaged front seven. Recently, Alex Okafor became the latest addition to the reserve list, joining Nathan Stupar, Alex Anzalone, Mitchell Loewen, and Nick Fairley.

Moore was cut by the Saints in October but circled back to the team in November. All in all, he appeared in five games for New Orleans with five tackles, two passes defensed, and one forced fumble. If he clears waivers, he’ll be free to sign with any team on Friday.

Freeny, 28, did his most notable NFL work with the Patriots in 2015 and 2016. His latest stint in New England lasted only a week, however.

Because the trade deadline has come and gone, Freeny will hit the waiver wire. If he is not claimed by a team in the next 24 hours, he will be free to sign with any club of his choosing.

In ’15 and ’16, Freeney has recorded 60 tackles and one sack for the Patriots. He appeared in only 18 games during that span due to injury.

The Patriots have signed Jonathan Freeny, a source tells Doug Kyed of NESN (on Twitter). Details of the deal are not known, but it is most likely a one-year pact for the prorated portion of the minimum salary.

The 28-year-old linebacker did his best work with the Patriots in 2015 and 2016, though the ’16 season was mostly lost due to injury. He started eleven games in that span, but he was not able to make the Pats’ initial 53-man cut in September. After stints with the Ravens and Jaguars – the latter lasting less than a week – he’s back in New England.

Freeney will provide some much needed depth at linebacker. It’s not clear whether Trevor Reilly will be able to suit up this week after suffering a concussion. Meanwhile, Dont’a Hightower, Harvey Langi, Shea McClellin, and Derek Rivers are all shelved.

The six-year NFL veteran amassed 60 tackles and one sack for the Patriots over the last two years.

Marcell Dareus passed his Jaguars physical, making the Bills-Jags trade official, per Adam Schefter of ESPN (on Twitter). In sending only a draft pick Buffalo’s way, Jacksonville needed to clear a roster spot to make room for the defensive tackle.

The Jags did so by cutting Jonathan Freeny, per Ryan O’Halloran of the Florida Times-Union (on Twitter). Freeny spent less than a week with the Jaguars, signing with the team earlier this week after playing three games with the Ravens this season.

The 28-year-old linebacker’s most known for being an 11-game starter with the Patriots from 2015-16, collecting a ring last season. The Ravens cut Freeny last week, and the sixth-year defender worked out for the Jags on Monday.

Jags executive VP Tom Coughlin described Dareus as an experienced player who’s been “productive throughout his career” and a talent who will help the Jags “immediately” (Twitter link).